Nerf Gun Mods: Get Maximum Range & Firepower From Your Blaster in 2021

You have a NERF gun and you like it, but there’s always something about it that makes you want to get more power out of it. And let’s face it. The gun is capable of shooting further but in the interest of safety, Nerf always tones it down. But do you know with a little bit of patience and some tools, you can make the guns more powerful and blow people away… like the one below.

Hey! We recently reorganized all NERF guns by category. take a look at the ones that fit you the most:

From Beautifying to Range Boosting, These Are The Mods You Can Do

1. Drop in a Stronger Spring
this alone adds the most range

2. Remove the Air Restrictors
every blaster has them

4. Build a Better Barrel
use PVC, PETG, or Brass

Replacing the stock spring and removing the air restrictor are popular modifications because they have the most impact on range, and are fairly easy to do with the introduction of Mod Kits. Since everything you need is available in these convenient kits, the only step for you to do is installation.

You can learn more about these kits and what blasters they are available for here. I also have a review of several mod kits.

Why You Mod Your Blaster?

Modding accomplishes two major things. For one thing, your range will increase dramatically. Think about the Nerf gun you have. How far does it shoot? Your answer will probably be between 15 and 35 feet Not bad, but imagine that once you have all the power you need in that gun, the darts flying double or even triple that length? It’s not unheard of. Some people have modded guns to shoot well over 100 feet.

The second reason relates to automatic guns. When you buy an automatic rifle, it can clear a set of 25 rounds in about 7 or 8 seconds. But what would it sound like to have the guns empty the 25 rounds in just 3 seconds? More than 8 rounds per second shooting at a victim. That sounds cool, right?

Some people even take their creations and sell them for a profit on eBay or other auction sites, so if you’re looking to make a few bucks on the side, then it can be accomplished also doing this.

How Do I Mod a Nerf Gun?

It’s actually easier than most think. There are three basic things you can do with almost any gun on the market sold by Nerf. Make the spring stronger, Removing air restrictors or modding the barrel, and replacing it with a brass tube. All three of these are done with the intent of putting more power in your shot so when you fire a dart, it will go further. You also can create your own darts, called “Stefans” to use.

For this, you will need to unscrew the blaster and be sure not to lose them. In fact, just put them in a yogurt container for safekeeping (trust me they are very easy to lose). Once you unscrew them at the shell, separate the shell halves. the internal nuts and bolts are there. You also will find springs inside the pulling system. In the CS-6 for example, it is in the middle. You can buy several 20 lb. springs that will dramatically increase the power of your shot. You may need to reinforce the gun with PVC pipe afterward because the kick will make the gun that much more powerful and you don’t want the gun to fall apart. Then you just replace the screws and you’re all set. Finding the spring on your gun is not that difficult.

Higher tension springs can be found easily. There are a lot of sellers now! OrangeModWorks is one, and they have a large selection.

Air Restrictors are parts of plastic that take roughly half of the energy that you put into the shot and just throw it away. Take a drill, a long bit, and a Phillips Head screwdriver. Unscrew the screws on the gun again remembering where they all go. Near the middle of the gun once you remove the trigger on the CS-6 is a blocked space inside of a tube that looks like a turret. The opposite side will have a needle pointing about 2/3 of the way outside the tube. Drill out the needle part and you will have no restrictions on the air, allowing shots further than you ever thought possible. Remember to reassemble the gun.

a direct view of the air restrictor on the Hammershot, with it removed in the right picture. Cool! (Source: nerfscience.blogspot.com)

This is simple really. Most of the barrels are made of cheap plastic and do not hold in air. By taking a 17/32 inch brass barrel that provides a better fit for your darts, will allow for more buildup of air behind the dart, which generates more force and further shots! Just take out the barrel and replace it with a brass one. This can be done in about 15 minutes.

A brass barrel mod for the Longshot. This was done by modworks.blogspot.com.

While brass is the best, some modders don’t use it. Here are some other materials you can use.

A nerf dart is usually made out of 1/2″ Foam Backer Rod. Pick up a 20 foot bag at your local hardware store and guess what? You have 20 feet of “darts”, except you need to put a hole in them. So cut proper dart length for each one (you’ll get about 75 in each bag). Cut and straighten them by using a hair dryer and a pillowcase. Let the hair dryer run for 1-2 minutes and shake the pillowcase, and let them cool.

Next, using a glue gun (don’t add any glue yet) carve holes in the top at the center, put a BB in and then glue over the BB to fill it up. In about 30 minutes, you’ll have 75 of these well made.

While some people like the way Nerf guns look all on their own, others want to modify their guns to look futuristic or just customized to their personality. A lot of people are taking to applying decals, paint and other means to customize their Nerf guns. It’s not as common as the performance based hacks but it’s a growing part of the modding community. It’s also the more noticeable ones because some people paint amazing themes!

Here’s one of the many being sold on eBay! The market for them has exploded thanks to cosplay events like comic-con.

This is another mod but it isn’t as simple as the above one (not even close) that being said it takes a bit of experience but you can do it in an afternoon if you have the resources available. You can take a rapid fire action gun, one that has a chain style loading belt and increase the voltage on the gun by adding larger battery packs (the kind in remote control cars and boats). This requires some wiring experience but once applied it can increase your rounds per minute to up to 500. Be careful though, some people have melted their guns doing this, no kidding!

Ready to Get Started?

Modding Nerf Guns and creating your own darts are quick and easy ways to get the most out of your gun, and whether you want to shoot further or sell them, modded guns are in demand, so either way, you win!

The easiest way to get in on this action? A mod kit! So check out my mod kits review, and see what they are all about.

Here’s additional articles on how to mod your Nerf Gun: 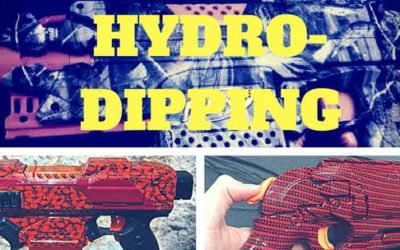 How to Hydro Dip Nerf Guns

It's not just for car parts or fancy tech anymore. Today there's a simple way to get intricate, expensive-looking patterns onto your blaster's shell without the use of professional equipment. Hydro Dip your Nerf Guns! And the best thing? You can do it all at home with... 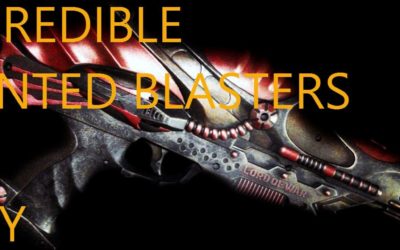 Store-bought Nerf guns can be simple, and sometimes boring. Bright orange details aren't the best when you're trying to hide from your brother. A bright blue rapid-fire style gun doesn't feel very fitting for a cowboy. It's great for holding all your ammo, but what if... 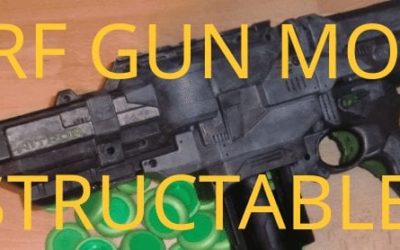 Bored? Here’s 15 Nerf Gun Mods on Instructables.com For You to Try!

No matter who you are, Nerf guns can be a lot of fun. With these top 15 Nerf gun mods from Instructables.com, your Nerf gun battles and contests can be even more exciting. 1. Nerf Vulcan Mod by ManaEnergyPotion This Nerf Vulcan Mod allows a Nerf chain gun to fire... 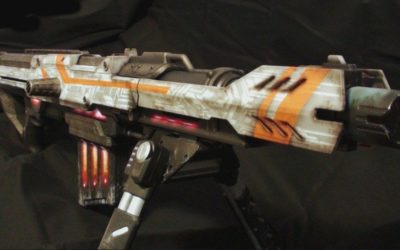 Extremely popular for its interactive storytelling, role-playing, and action elements, the Mass Effect sci-fi video game trilogy has received tons of awards and acclaim. In fact, the year it came out it was recognized as the 2007 Game of the Year by the New York Times... 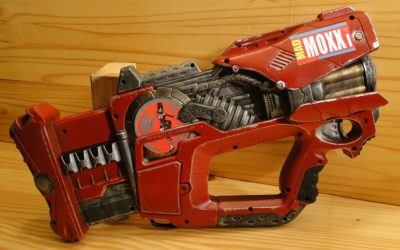 A first-person shooter video game series that is famous for its extensive campaigns and over-the-top kills, Borderlands and Borderlands 2, also have a ridiculous amount of guns available for players to choose from. This is entirely thanks to Borderland's random gun... 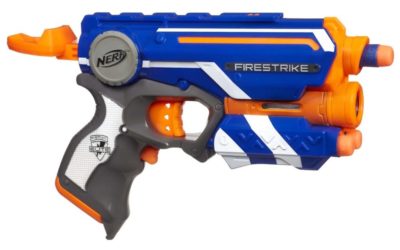 Nerf guns are fun to shoot and have Nerf wars with, but they are also loved by Nerfers for their ability to be modified. A cross between a functioning, plastic jigsaw puzzle and pure artistic vision, there is just something about the customizability of Nerf guns that... 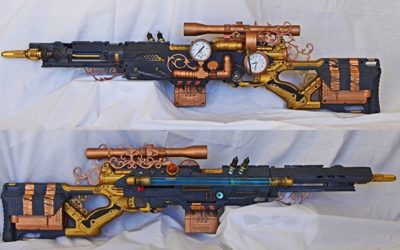 Other than having epic Nerf wars, many Nerfers love the fun of modding. Some revamp only the innards of their blaster, while others do visual mods using paint and glue. Of the many types of modders, the Steampunk community has embraced modifying Nerf guns whole... 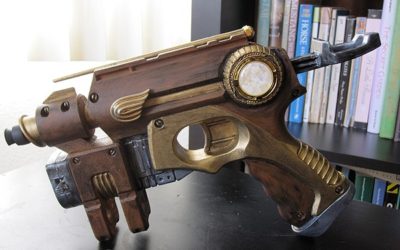 Tips for Steampunking Your Nerf Gun

Nerf guns are a favorite among steampunk enthusiasts, as they can be modified in so many ways. With a bit of creativity, time, and effort, a standard Nerf gun can become an affordable and awesome-looking steampunk prop. Besides serving as fancy display pieces, they... 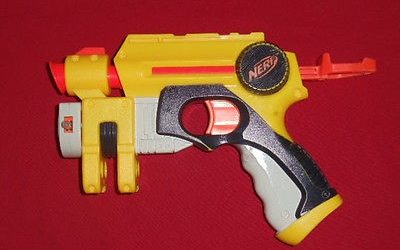 If you’re new to modding Nerf guns, sometimes the write-ups people post on the internet can seem complicated and difficult. While some of the in-depth and advanced mods are definitely complex, Nerf guns are commonly modded precisely because they can often be taken... 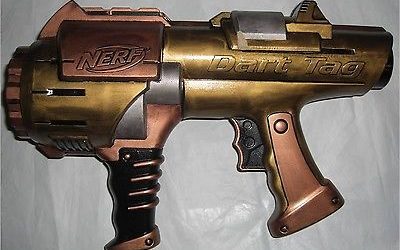 Straight from the box, Nerf guns are clearly plastic toy blasters. It certainly doesn’t help that they are often bright neon orange, yellow, or blue. While there’s nothing wrong with leaving Nerf guns as they are, doing a personalized paint job on your newest... 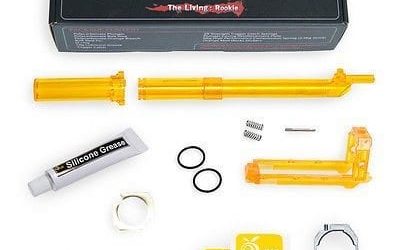 The people over at Orange Mod Works were cool enough to send me a couple of complimentary upgrade kits to test out. After getting the essentials together -- a chronograph to measure the velocity of each blaster and some tools to do the installation -- I'm finally...

So you want to mod the barrel on your Nerf gun so it will shoot farther? That's understandable. The three most commonly used materials for this mod are: Brass Barrel - Most Popular CPVC Barrel PETG Barrel Chances are you've looked around and to much demise, have no...