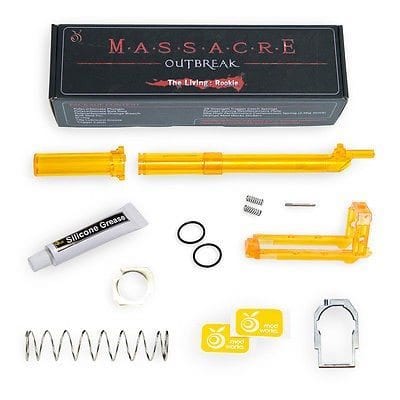 The people over at Orange Mod Works were cool enough to send me a couple of complimentary upgrade kits to test out. After getting the essentials together — a chronograph to measure the velocity of each blaster and some tools to do the installation — I’m finally ready to sit down, and shell out a review.

What Kits am I Talking About?

If you haven’t noticed, NerfGuns.net has some banners for ‘Nerf Gun Mod Kits’ placed around the site. These kits are sold by Orange Mod Works, a relatively new shop that specializes in creating high-performance parts for Nerf Guns. These kits contain high-performance metal or polycarbonate parts that replace the brittle, and otherwise, puny stock parts to give your blaster a massive boost in power. When they said 70 FPS they weren’t kidding…

See the Kits and all their glory

What Makes These Kits Special

Since the dawn of time, modders have been adding high-tension springs into their blasters to add distance. While they would see a boost in range, they would also likely see — a couple weeks later — their blaster shatter in their hands. Since most mod enthusiasts lack the equipment to hone out stronger internals to withstand a stronger spring, OMW has stepped in to provide them with exactly what they need — stronger everything.

Installation — Can Be Tricky

The hardest blaster by far to put back together was the Alpha Trooper. The halves wouldn’t match, and pieces would shoot out while trying to match them up. Another big issue I had was keeping the main spring in the blaster, it just didn’t want to stay in. Oddly enough, what worked for me in the end, was assembling it while it was cocked. Between losing springs, and forgetting where screws went; you could say I was a little out of practice… but eventually got everything in it’s rightful place. I’d offer tips on installation, but I can’t say I know what I did to keep everything to stay put… I pretty much just got lucky. When I do figure out how to appropriately do it, I’ll be sure to post a thorough tutorial on installation for the Alpha Trooper and other kits. The other blasters — the Longstrike and Recon were by far the easiest :).

I was excited to give them a go. However, when I came across misfires, jams, and cocking issues, I realized something was up. Not all of them had issues, but below you can see what things I ran into while shooting them. You will also be able to see how much harder, in terms of Feet Per Second, each blaster fired.

Which Kits Are My Favorites?

The Recon Stage 1 & 2, and Longstrike Stage 1! I know the Raider and Alpha Trooper would perform better if there were stage 2 kits available for them, which supposedly the new Massacre kits will take care of, but even if they had them installed, there are some things that put them at a disadvantage to the Longstrike and all-mighty-Recon.

For one, The Raider and Alpha Trooper both had cocking issues, and secondly, they were harder to re-assemble — the Alpha Trooper being the hardest. What I like about the Longstrike, is that it already is a pretty accurate blaster, and the extra boost in power makes it feel much more like a sniper rifle, which is awesome. It also was fairly easy to put back together.

3 Kits to Rule Them All

If you haven’t guessed it, my top favorite one is the Recon. The Recon has always had a smooth action, and even with both OMW kits installed — it’s still smooth! You not only can shoot much further, but you can still shoot off rounds fairly fast, even with the stronger spring. Aside from shooting great, it also is an incredibly easy blaster to take apart and mod, as well as put back together.

My second favorite was the Longstrike Stage 1. It has a smooth action and shoots incredibly far. Also, what’s cooler than a Nerf gun sniper rifle that actually shoots far??? When you go and get a kit for it, opt for the new Massacre kit, because it includes the Stage 1 kit as well as upgraded, stronger internals.

The Future of Mod Kits

With the news of new kits being developed at OMW, I’m excited to see what the future holds for Nerf gun Mod kits. This is a great idea in my books, and one I anticipate will be a huge success among avid Nerf fans, and on college campuses plagued with zombies.

The newest ones I’ve heard about are the Massacre series; which has all the parts you need in one convenient kit. I’m hoping that they will give the other Nerf guns — Alpha Trooper and Raider, a chance to catch up to the Longstrike and almighty, modded, Recon :).

Until then I 100% recommend you get both kits for the Recon, and a Massacre kit for the Longstrike, so you too can own a deadly combination of high-powered Nerf guns that will destroy zombies, pwn fellow desk jockeys, and wow your friends :).