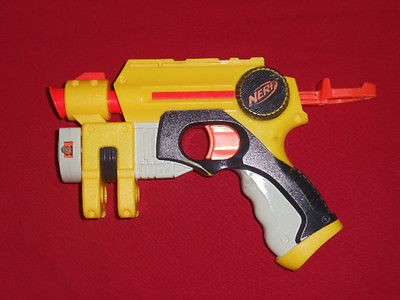 If you’re new to modding Nerf guns, sometimes the write-ups people post on the internet can seem complicated and difficult. While some of the in-depth and advanced mods are definitely complex, Nerf guns are commonly modded precisely because they can often be taken apart and customized much more easily than say airsoft or paintball guns.

Depending on where you live, Nerf guns can also be much less expensive than other types. This means that if you mess up and break the gun while modding it, it’s much less of a big deal money wise.

There are generally two types of Nerf guns- spring loaded guns or pump loaded guns. You can tell what kind of gun you have by how you prime it for shooting. If you have to pump it a few times, then it’s a pump gun, meanwhile spring guns usually have a trigger and cocking mechanism of some sort.

Since spring guns and pump guns function differently and are thus modded differently, this article will focus just on simple ways to enhance a Nerf spring gun.

While there any many types of Nerf spring guns, they basically all use a plunger and spring mechanism to compress the air inside and propel the dart out. Since your Nerf gun is unique, it can be worth taking time to carefully open the gun and figure out how its mechanics work. Just don’t lose any of the pieces as you are tinkering with it.

In spring guns, the spring is what helps the plunger compress air. If you replace the stock spring that came with the gun with a stronger spring, the plunger of your gun can compress air faster, which creates more force and power behind the dart when you shoot.

Stronger replacement springs can be found in hardware stores and places like Home Depot. Be careful not to choose a spring that is too strong though, as you run the risk of the barrel detaching or other inner plastic parts breaking.

Once you choose your spring, use a Dremel with the proper cutting wheel attachment or bolt cutters to trim your spring to the same (or very close to the same) length as the stock spring. Then, just unscrew the plunger head and replace the old spring with your new one.

Other spring replacements include putting in an extra spring or stretching out the stock one, but these tend to malfunction or break later and are less recommended than simply replacing the spring with a stronger one.

Most Nerf spring guns create a seal against the inner plunger tube using an O-ring. This little elastic rubber ring is not usually perfectly airtight, but the range of your Nerf spring guns can really be improved by making the O-ring seal stronger.

Much like replacing the spring, you can simply replace the stock O-ring with a one with a better seal. Another option is adding a second O-ring next to the first one on the plunger head, as a double seal is more airtight. Lastly, you can instead tape a thin layer of electric tape (the slick black kind) in the O-ring slot before placing the O-ring over it to make the seal slightly larger.

Whatever method you choose to improve the seal, don’t make it too thick. The plunger still has to slide smoothly and comfortably through the plunger tube.

Have you tried modding a Nerf spring gun before? What do you think of these two basic mods?