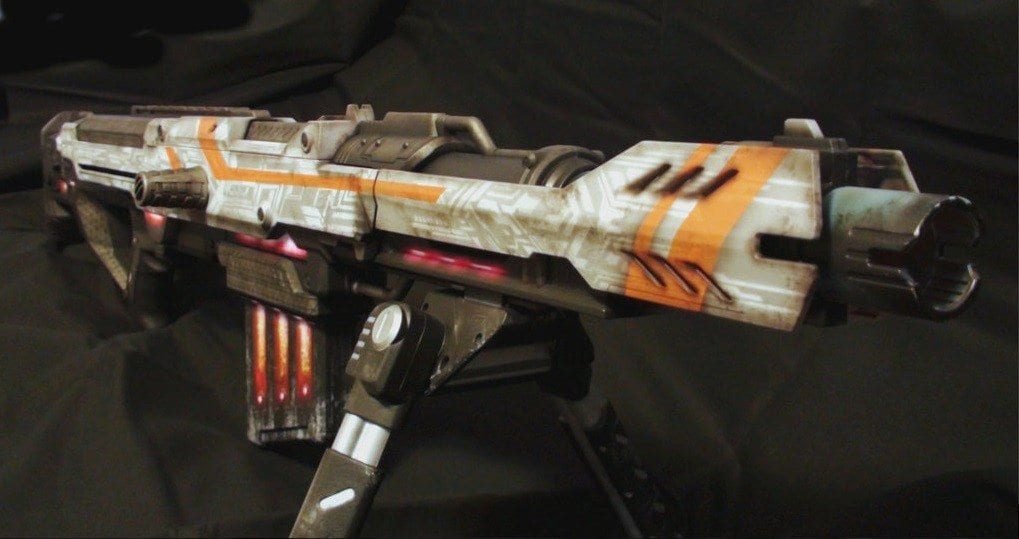 Extremely popular for its interactive storytelling, role-playing, and action elements, the Mass Effect sci-fi video game trilogy has received tons of awards and acclaim. In fact, the year it came out it was recognized as the 2007 Game of the Year by the New York Times and was also given the #1 spot of Top 25 Xbox 360 Games by IGN in 2008.

As a third-person shooter where players get to be Commander Shepard fighting to save the galaxy from the Reapers, this series’ guns have a well-recognized and distinct look to them. Whether you’re a fan of the Mass Effect franchise or just want to see some video game inspired props, check out these awesome Mass Effect Nerf gun mods.

by Ron Scott of SteampunkWasteland

First up is a Mass Effect inspired Nerf Proton by Ron Scott of SteampunkWasteland. This mod perhaps best illustrates just how much of a difference a simple but good coat of paint can make on a Nerf blaster. If you compare Ron Scott’s ME prop to the original Nerf Proton, it’s almost unreal how a green and orange toy blaster can become a slick sci-fi piece by just adding an N7 logo and some black, white, and grey paint.

Originally a Nerf Centurion, this mod by Atropos907 is an airbrushed work of art. Evoking both Mass Effect and District 9, this Nerf gun mod has great paint texture and an intricate design all across the blaster’s body. Anyone who has ever tried detailed painting on a Nerf gun should be truly impressed by the two-tone color scheme, blending skill, and precise patience of Atropos907. We especially like the glowing effect he has going on down the magazine.

Skillfully crafted by RebelATS, this epic Mass Effect M-92 Mantis sniper rifle is a heavily modified Nerf Raider. Still functional, this mod not only features an extended barrel, but also showcases how the unique shape of a gun’s stock and sight can be built up using modeling clay. The blaster looks awesome, and the 20+ hours RebelATS spent were well worth it, as the gun almost perfectly matches how the M-92 Mantis looks in game.

Another great piece, this custom modded Nerf Stampede evokes a striking red and black Mass Effect N7 theme. Known for his flawless paint jobs and detailing, Johnson Arms created a handsome prop that would be a great addition to a Mass Effect themed display or any cosplayer’s arsenal. Johnson Arms’ choice of such bright and contrasting colors especially makes the N7 logo shine.

Impressive on multiple levels, feast your eyes on the M8A by Nerfenstein. Inspired by the M8, this sci-fi assault rifle is in fact a modded Nerf Praxis. Even though the M8A is mostly grey and black, the underlying detail work only heightens the illusion of metal plating across the blaster. Notable is the ammo magazine. Using transparent red-orange-yellow sheeting, Nerfenstein added a LED to the inside of the magazine tube so it not only lights up, but cycles through the colors for a heat exchange effect.

Which of these Mass Effect mods did you like most? Let us know in the comments below!