Tips for Steampunking Your Nerf Gun 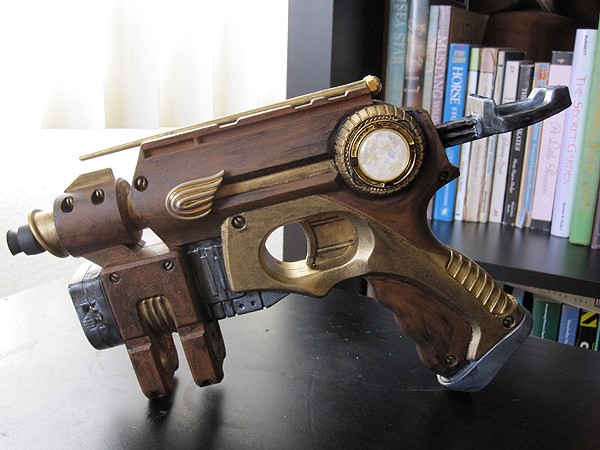 Nerf guns are a favorite among steampunk enthusiasts, as they can be modified in so many ways. With a bit of creativity, time, and effort, a standard Nerf gun can become an affordable and awesome-looking steampunk prop. Besides serving as fancy display pieces, they can also be used in conjunction with anime cosplay costumes or steampunk-themed cosplay and events.

Other than steampunk purists, who might take offense to the idea of modifying a plastic gun, a Nerf blaster is a great starting base for a steampunk creation. Here are some ideas to help you steampunk your Nerf gun.

Coming in bright neon colors like orange, yellow, and blue, Nerf guns are the furthest from steampunk imaginable. Plastic and slick, it might seem that a toy Nerf blaster would never look authentically metal and weathered. However, with a few choice applications of silver, gold, and/or especially bronze colored paint, the whole feeling of your Nerf gun will change.

Dirt or rust colored finish can be rubbed in to create an old and weathered look that is distinctly steampunk. Don’t forget that even though your Nerf gun is plastic, it can also be painted so the pistol grip and body look like they are made of wood. Choosing the right colors and taking time to texture can create the awesome illusion of having an authentic wood and metal steampunk gun like the one by Cation Designs featured above.

Just because your Nerf gun is made from plastic doesn’t mean that you can’t add metal parts. For steampunk especially, there has to at least be some metallic looking elements.

For Nerf guns, pipes and fittings can be used to modify the barrel as well as incorporated as a decorative part. Most hardware stores carry pipes and fittings in all sorts of sizes and angles. The most common are copper and plastic (PVC).

Copper pipes and fittings can be more expensive, so if you’re steampunking on a budget, don’t hesitate to go for the PVC. You can paint the plastic pipe or fitting to look metallic or wood after all.

Be Creative with Adornments

Take time to explore the shelves of doodads your hardware store has to offer. Buttons, gears, hooks, tubing, and metal sheeting can all be appropriated and attached to your Nerf gun to create steampunk details.

For creating an awesome gun, you’re only limited by your creativity. Those seemingly ordinary hose clamps used to fasten tubes to dryers? They can be used to wrap around and attach things to the body of your steampunk gun. Metal wall hooks can act as pistol trigger guard. Hardware stores also often carry intricate wood pieces that you can paint and turn into a metal decorative piece.

If you want to add steam gauges or parts that light up, make sure to check out the car accessories section, where there are lots of little devices that could do the job.

Have you steampunked any Nerf guns? Let us know how they turned out in the comments!