How to Hydro Dip Nerf Guns 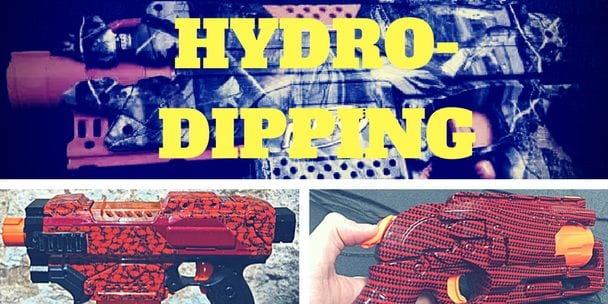 It’s not just for car parts or fancy tech anymore. Today there’s a simple way to get intricate, expensive-looking patterns onto your blaster’s shell without the use of professional equipment. Hydro Dip your Nerf Guns!

And the best thing? You can do it all at home with a tub full of water and a simple kit of your choice from Amazon.

There are loads of patterns available too, and the number of graphics keeps growing as hydro dipping gains popularity as an easy, fun way to drastically change the appearance of just about anything.

What You Will Need

How to Hydro-Dip a Nerf Blaster

You can different levels of quality, by putting as little or as much effort into this as you want. To get high-quality finish, that will rival the ones you may have seen on Youtube, all that effort takes place before and after the dip.

The before part is Prepping, and the after part is Finishing.

In this tutorial, we are going to cover all the stages, because the internet needs pictures of more great-looking custom blasters.

Prep For Pool-Day – Get Your Blaster Ready

You will remove the shell of your blaster, and lightly sand it with 400 grit sandpaper. Then you will spray paint it with a plastic primer like Krylon Plastic Primer.  Once the primer has dried you will then spray paint on a base color of choice. This base color acts as an accent layer for your hydro-film pattern to visually-pop out on.

If you were to dip without a base color, your hydro-film pattern would be lost on the original plastics’ bright colors. Basically, it’ll be hard to see!

The quick steps for this are available in this post, or you can follow steps 1-5 of our in-depth painting guide.

When your base coat is dry you can move on to the dipping stage.  This part can be a bit intimidating for some because they don’t want to mess up the pattern and be stuck with a dumpy looking dip-job.

If mistakes are made, know that all it takes to start over is a little sanding, and a fresh layer of base coat. So, you have no reason to worry, because it’s an easy fix. Dip away and don’t worry.

You are now almost done, and deserve a high-five if you are quick enough here is -alright that was fast, I barely got my hand up for a five and you got it right away… you are so much faster than all the others.

Seal For Freshness – Make it Last

By now your blaster shells look neat and you love it. And so, now you must protect it.

Not doing this step means all the work you just did won’t last very long, which would be bad, because you probably want to keep it around and admire it forever!

You can find way more on sealing in part 11 of our free PaintYNG guide.

Where to Buy Hydrographics

Amazon is the preferred place to buy hydrograhic film because it has the largest selection. A good kit will come with 3 sheets of film and activator spray. Here are some.

Ideally, the best blaster for hydro-dipping will be easy to take apart, have large shells that that provide plenty of  surface area for the film to adhere to.

Any blaster in the Rival series will look great hydro-dipped. Blasters in this range have large split-piece shells that offer plenty of surface area for dipping. All this means is you get a bigger canvas for your pretty patterns to pop-out on.

Smaller shells that have lots of smaller pieces aren’t necessarily the best for this because they will require more cutting of the film and more time dipping, which isn’t everyone’s favorite kind of cake.

Blasters that have large rotating barrels and components that aren’t apart of the shell are also ones you may want to stay away from if you want a blaster with a more uniform look.

For someone that wants to go to the next level, a great option is to grab a premium blaster shell like the X Zeus 2, which is a higher quality shell that comes with many perks.

Not everyone will be excited about dipping a $3 dart gun with internals that could break any moment, but for a $80 blaster that will last long? That’s something to get excited about.

With a X Zeus 2 you will have not only an awesome looking blaster, but one that performs great and can deliver loads of use well into the future. You can pick up an old Longshot and put the internals in the Zeus shell, or buy one of these mod kits for increased firepower.

Have Fun With it

If you always wanted to paint your blaster, but lacked the artistic skills to produce the head-turning blaster you envision, then this is made for you.

It’s something anyone can do in their own home or backyard without having to borrow hard-to-find equipment of any kind. The end result is something that looks like it was printed on, and almost unbelievable that it was done with a tub of water…

and that’s why you should try it for yourself. You won’t believe how incredibly clean your creations come out.