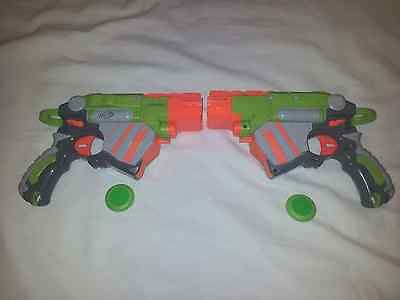 I talk about the dart blasters so much on here that I tend to neglect the fact that there are some really good disc blasters out there. Disc blasters can get some impressive ranges. There are a couple downfalls to disc blasters. The first is that after about fifteen feet they tend to decrease drastically in flight speed. This makes it easy for your opponents to evade the disc. The second downfall is that you need to hold the gun upright and steady or else your accuracy is going to be off by a lot.

Despite these downfalls, disc blasters can be a lot of fun, especially at short range. Below are my top 5 recommendations.

Released just last fall, the Revonix360 is a single slam fire disc blaster that features a stock capacity of 30 discs thanks to the integrated disc drum. There are five chambers of six discs each. There is plenty of room to mod this baby. There is a tactical rail and an attachment point for a detachable should stock.

Diatron is part of the Multishot Madness sub-series, since as you may have guessed, it can fired two discs at a time. The coolest thing about the Diatron is its design. It is like having a gun and its mirror image and fusing them together. It is the only multi-fire blaster in the Vortex series, and oddly enough, it does not come with enough discs to fill its ten disc capacity.

This is the only non-Vortex disc blaster to make the list. The Fusefire is unique because it glows in the dark and uses glow in the dark discs. It also takes three AAA batteries to charge the discs. There is a stock capacity of ten. Though it is not the most practical for night battles (you will give yourself away), it is fun to mess around with.

The Nitron has the honor of being the first Vortex blaster and the first disc blaster to require batteries. With six C batteries, you can automatically shoot up to twenty discs. The magazine that holds the discs is detachable, and you can hold another magazine on the integrated shoulder stock.

I recently wrote about this being my top current blaster, so it only makes sense to list it as the top disc blaster. It has a forty disc drum making it the highest capacity Vortex blaster, and the Pyragon is compatible with all other disc magazines. I recommend getting a shoulder stock with this.

What disc blasters do you like the most? Which do you think do not belong on this list? Sound off below!