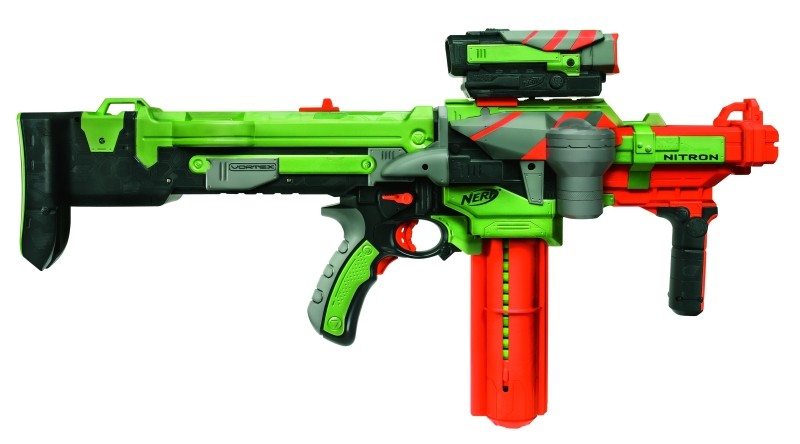 Have you seen the Nerf Vortex Nitron Blaster yet? In case you haven’t heard, the Vortex series is a bunch of Nerf weapons that shoot foam discs instead of the usual darts, arrows, or balls.

Features of This Disc Launching Blaster

The Nitron is probably one of the most serious weapons in the Vortex line, it has extra storage capacity so you don’t have to call off the battle every couple of minutes to collect all your ammo again. You can also use it like a machine gun and just spray your target with a ton of discs. The Nitron is also fully automatic and battery powered, so you don’t have to rely on compressed air or springs to propel those discs. The motor makes it a little heavy, but the Nitron is still easy to run around with. It needs two AAA batteries and six C batteries, it’s probably a good idea to get rechargeable ones if you think you’ll burn through a lot of batteries using the Nitron. There’s also an electronic scope that isn’t really that useful but is a lot of fun at night. You won’t be able to use this one for stealth operations, though. The motor is kind of loud.

The Nerf Vortex Nitron Blaster comes with 20 green discs that are about 1.5 across. They fly like little tiny frisbees and bounce off everything. The Nitron reloads like a real machine gun, the discs go into a magazine which attaches to the bottom and holds all the ammo. You can buy extra discs and even an extra magazine for super-fast reloading. All the other weapons in the Vortex arsenal use the same discs and magazine. Be careful with these things, they blend in with the grass and get lost really easily.[easyazon_block add_to_cart=”default” align=”right” asin=”B004SKX8M0″ cloaking=”default” layout=”left” localization=”default” locale=”US” nofollow=”default” new_window=”default” tag=”126p86-20″]

The Nitron Blaster is a lot like the N-Strike Stampede, another automatic machine-gun-type weapon that shoots darts. The Nitron is easier to carry, though. The Nitron also has better colors and looks more like something we would run around the neighborhood with. Upon testing we discovered that the accuracy that Nerf advertises isn’t really that impressive. Unless there is absolutely no wind, the discs fly way off course outside and are really easy to dodge. The range is pretty incredible though, close to 50 feet without a breeze. Indoors this thing is way too much fun and the biggest problem is losing the discs behind the couch.

Conclusion – What We Think

The Vortes Nitron Blaster is pretty awesome for a Nerf weapon. The discs are a lot more versatile than darts, and it’s easy to reload. The Nitron has more range than any other weapon, but outside the accuracy is pretty bad. The best part about the Nitron is that it is fully automatic. The worst part is that it’s heavy and the motor is loud enough to give away your position. You can’t really have an automatic weapon without the weight and the noise, so it’s a pretty good trade-off.