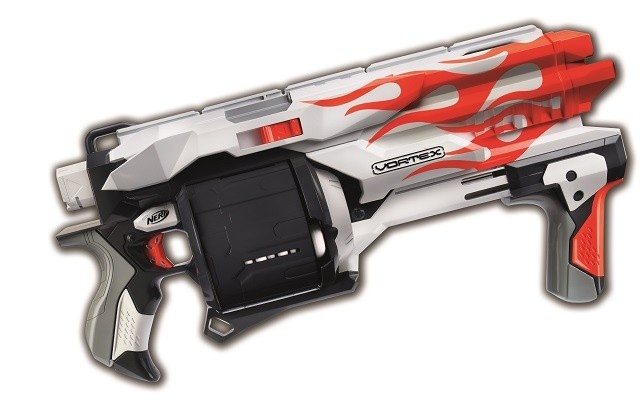 Nerf Spins Up With the Revonix360

Orange darts are practically synonymous with the Nerf name, but they’re not the only ammunition Nerf blasters can fire. The Vortex series of blasters is one example, eschewing traditional darts in favor of green foam discs called XLR discs.

The Revonix360 is an upcoming addition to the Vortex line. It boasts a fearsome appearance modeled after a grenade launcher, but replaces the grenade cylinder with a rotating 30 disc drum. While this is ten fewer rounds than the Pyragon carries, the Revonix360’s drum is integrated much more smoothly with the blaster and makes it far more portable. The only potential drawback for this is that the drum of this blaster cannot be removed, meaning you can’t carry spares for quick reloads.[easyazon_block add_to_cart=”default” align=”right” asin=”B00DW1JU7I” cloaking=”default” layout=”left” localization=”default” locale=”US” nofollow=”default” new_window=”default” tag=”126p86-20″]

Like the Pyragon, the Revonix360 is capable of slam firing and has both a tactical rail and an attachment point for a shoulder stock. It can be slam fired by holding the trigger down and repeatedly pumping the front handle, and the drum rotates after each shot is fired. Aesthetically, it shares a similar white and orange color scheme with the Pyragon and Diatron, though it replaces the smooth orange stripes with orange flames near the barrel.

The Revonix360 is advertised with a firing range of seventy feet, and promises to be as reliable as other blasters of the Vortex line. However, users should be aware that Vortex blasters have a tendency to curve their shots to the left or right, due to the fact that the discs are fired by spinning them. This curve is consistent with every shot, so once the shooter adapts to it they should find the blaster to be remarkably accurate.

The Revonix360 is to go on sale in the Fall of this year, with a projected price of $39.99. This puts it up near, if not at, the top of the series in terms of price and performance.