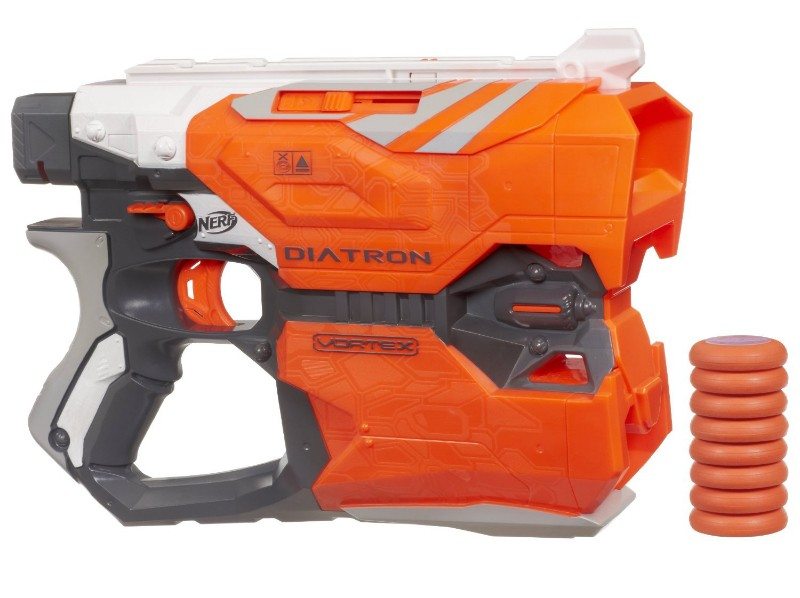 When most people think of Nerf, they think of the standard rifles that shoot out bright foam darts. While the N-Strike line still provides classic guns and ammunition, Nerf changes the rules of foam play with the Vortex line: a line of blasters and rifles that fire foam discs instead of darts. Much like the name suggests, the Nerf Vortex Diatron Blaster is a part of this family.

Right away, you’ll notice the Diatron can burst ammo twice as fast as a typical Nerf gun; this small blaster is designed to shoot out a pair of discs with every pull of the trigger. There is no way to carefully fire a single disc at once; this one’s strictly for the frantic firers. Keep that in mind during your battles, or you might find yourself short on firepower. The range for the Diatron matches those of its other Vortex cousins, so you aren’t trading range for firepower should you opt for this blaster.[easyazon_block add_to_cart=”default” align=”right” asin=”B009T4QLXI” cloaking=”default” layout=”left” localization=”default” locale=”US” nofollow=”default” new_window=”default” tag=”126p86-20″]

One small setback for the blaster is the reloading mechanism; the Diatron uses a lever-based reloading system, meaning you’ll have to pull the lever away to reload your discs and push it back in to prime the gun. Though it’s necessary for the double-disc firing mechanism, it’s going to slow down your reloading time on the battlefield. Don’t let your enemies take advantage of your vulnerability here; take cover!

One odd thing of note is the Diatron comes with only eight discs, though it can hold up to 10; you’ll need to grab two more discs from another Vortex gun to get your blaster fully locked and loaded.

The Diatron does not come with a stock by default, though you can easily grab one from another Nerf or Super Soaker product to affix it to the back. By putting a stock to this blaster, which is designed to be a sidearm pistol, you can increase the gun’s accuracy and aim down the sights more steadily.

Above all, the Diatron is a new direction for the Vortex line, which makes it difficult to compare to the rest of its cousins. However, it’s still easily worth the price, making it a worthy addition for any Nerf fan’s arsenal.