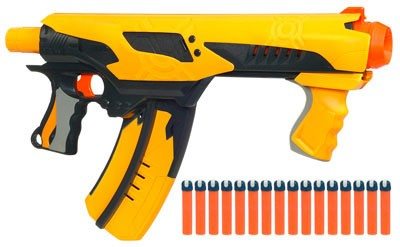 The Nerf Quick 16 Information and Stats

The Nerf Dart Tag Quick 16 is a powerful new Nerf assault weapon for tournament and home play. Kids and adults alike will love the Quick 16, as it can fire a volley of sticky darts up to 35 feet, making it the perfect choice for both amateurs and pro players looking to get in on the action.

The Quick 16 is aptly name for its magazine capacity. The Nerf gun holds one magazine of 16 refillable darts, and it supports most standard Nerf darts or Dart Tag sticky darts. Paired with an ammo bag, the Quick 16 can be as deadly and effective as other larger classes of assault weapons, such as the Raider or the Swarmfire.[easyazon_block add_to_cart=”default” align=”right” asin=”B0043E8N6M” cloaking=”default” layout=”left” localization=”default” locale=”US” nofollow=”default” new_window=”default” tag=”126p86-20″]

What Makes it Different

Unlike other assault class Nerf blasters, the Quick 16 has a lightweight frame that makes it easy to cart around on the battlefield when distance factors into the outcome of the match. Tournament players love the Quick 16 because of its ammo capacity, range, and firing speed. The magazine loads quickly into the weapon, making restocking ammunition easy. The Raider and Swarmfire are better options for assault troops backed up by players with smaller weapons, whereas the Quick 16 is good for mid-class troops who want rapid firepower but also value high mobility. For this reason, its the perfect weapon for a match with a sparse amount of cover, giving players high range and rate of fire without being encumbering to prevent quick movement.

The Quick 16 is a popular tournament weapon because of its relatively long range and moderate size. The Quick 16 pairs well with other sidearms like the Maverick or melee Nerf N-Force weapons like the Klaw Hatchet. The best application of this weapon is to arm scouts with the Quick 16 as a main weapon to lay down cover fire for assault troops, which should be stationed behind cover or at the back of the line with Raiders or Swarmfire Nerf blasters.

A few blasts from the Quick 16 will be enough to take out players with even good defenses. Aim the Quick 16 into the air and take advantage of wind and trajectory to rain sticky darts down upon assault troops. Flank slower troops from the side and unleash a volley of quick strikes from mid range, then roll behind cover and reload with an ammo bag.

The Nerf Dart Tag Quick 16 has a good-sized handle for adults and children, and the smooth sliding magazine makes removal and insertion of ammo easy. Like the raider, the magazine can be refilled at any time with a depression bar system. Simply slip new darts into the ammo container and push it back into the gun. Remove jammed ammunition by sliding open the side loader.

The Quick 16 is the perfect Nerf blaster for both tournament players and home players looking to have a blast with their friends. No matter the size of the battle, the Nerf Dart Tag Quick 16 is perfectly optimized for competitive and casual play, comprising the best features of all of the Nerf assault and sidearm weapons into one blaster.

Who Will Benefit From The Quick 16?

Pros will benefit from increased mobility, fast reloading time, and good range. Amateur players will have a solid weapon to start out with before they figure out their role in Nerf battles. As players continue to battle through matches, different body shapes and physical abilities will play into success, since players with long arms work better with full-sized assault weapons with the raider, while people who are short and quick on their feet would probably be better suited to scouting or fast-attack roles with smaller arms.

Whatever your game, gear up and unload in Nerf CTF, Nerf Zombies, Nerf Assassin, Nerf FFA, or ANY of these games with the Quick 16, one of the best-performing Nerf blasters in the Hasbro collection!