5 Games that Are a Blast to Play with Nerf Guns 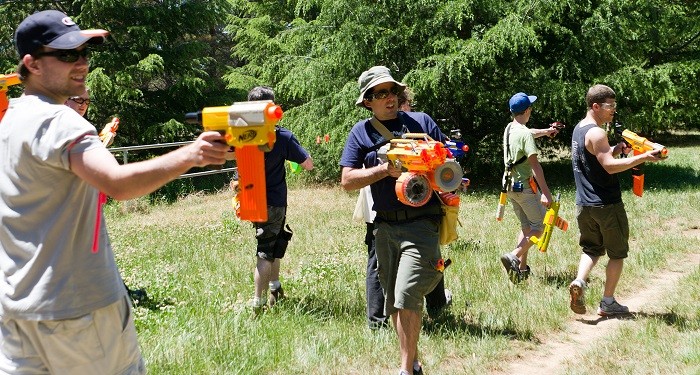 One of the best parts about having a nice collection of Nerf blasters is being able to test out their capabilities in competitions. I talk a lot about which blasters are best for Nerf games, but I just realized that rarely have I mentioned what games we actually play. There are always new games popping up, and the rule vary depending on which part of the country or world you are in. Below are my favorite 5 Nerf war games, and the rules we generally play by.

This is the most basic game. There are two teams of at least two people. If you are hit, you lose a life. After losing a pre-agreed upon number of lives (three or so), you are eliminated. If you eliminate everyone on the other team, your team wins. There are endless variations on this common theme. This is the most common form.

For this game, you will need a field, at least two teams of five or more people, and a large, sturdy container for each team. The goal is to get as much ammunition in the other teams’ containers, or cores, as possible. The team with the least ammo in their core after a set period of time wins.

This is played essentially the same as the non-Nerf blaster variety of freeze tag. You need a field and two teams. If you get shot by an opponent, you must freeze in place. Your teammates can unfreeze you by shooting or tagging you. The goal is to freeze everyone on the opposing team.

In general, this is kind of a lame game, but it serves its purpose. Invariably, when you schedule a Nerf war with fellow combatants, there are a few stragglers. Rather than just sitting around waiting for them, you can play this free flowing game. The goal is to shoot as many people as possible in a set amount of time. This works with or without teams and with any number of people.

Is your favorite game not on this list? Let me know about it in the comments.