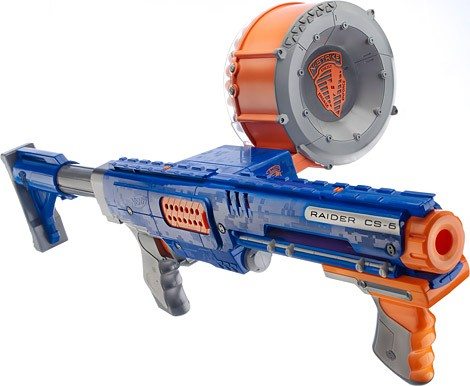 That Nerf Gun With The Huge Ammo Drum

New for 2009, the Nerf Raider is Hasbro’s newest addition to the N-Strike line of Nerf guns. It looks like a tommy gun, but doesn’t exactly shoot like one. What it does feature however, is an all mechanical (no batteries) operation, 35 round clip, collapsible stock, and two modes of fire.

“Get ready for the highest dart capacity NERF blaster yet! The NERF N-STRIKE RAIDER RAPID FIRE CS 35 blaster is the next big thing from NERF’s popular N-STRIKE line of dart blasters and features a collapsible stock and new drum magazine that holds 35 darts and is interchangeable with the NERF N-STRIKE RECON CS-6 blaster and NERF N-STRIKE LONGSHOT CS-6 blaster. By holding the trigger and pumping, players can instantly transition between “single” fire and “slam” fire mode, unleashing a rapid stream of 35 darts. Complete with a removable shoulder stock and Tactical Rail System allowing players to customize their blaster for each mission, the NERF N-STRIKE RAIDER RAPID FIRE CS 35 blaster also features a cool “digital camo” pattern unlike any NERF blaster before it. No batteries required.”

So as you can see, the Raider Rapid Fire CS-35 is not fully automatic as you would guess by its looks. The firing modes are either a) pump, then pull the trigger, or b) hold the trigger while pumping, each time the pump arm moves forward a dart will automatically fire. This is called an auto-trigger, which is a feature found on some pump paintball guns and airsoft guns as well.[easyazon_block add_to_cart=”default” align=”right” asin=”B001RBWY14″ cloaking=”default” layout=”left” localization=”default” locale=”US” nofollow=”default” new_window=”default” tag=”126p86-20″]

The cost for this Nerf gun will be $34.99 and its release date was set for fall of 2009, so it is widely and readily available for Christmas.