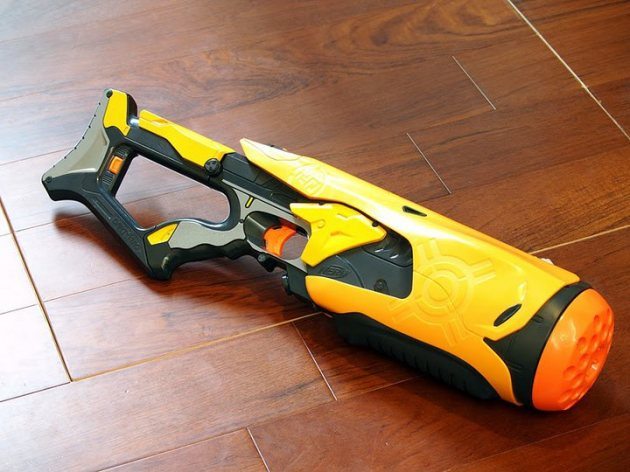 It looks like 2011’s bringing us plenty of great new additions to Nerf arsenals everywhere, and the Swarmfire is ready to give any Dart Tag player plenty of foam firepower. With twenty darts loaded up, you’re ready to take your friends on head to head, and staring down those barrels will give them plenty of reason to think twice about shooting first.

For those who’ve been playing for a few years, you might notice a few similarities to the Hyperfire from 2004 Taking a look at its yellow and black styling, it even looks like a bee ready to sting again and again. Whereas both guns present their full firepower right up front, the Swarmfire doubles the older gun’s capacity and backs it up with a battery powered mechanism. Lacking the front handle lets its weight rest right in your hand and makes it feel more like an assault weapon. Also, the textured grip keeps it from sliding even during a fierce firefight. In case you don’t always want to feel the full weight of the weapon, you’re in luck! The shoulder stock is completely detachable which turns the Swarmfire into a more compact blaster that’s even quicker to aim.[easyazon_block add_to_cart=”default” align=”right” asin=”B0043E8JKW” cloaking=”default” layout=”left” localization=”default” locale=”US” nofollow=”default” new_window=”default” tag=”126p86-20″]

If you like mounting accessories on your weapon, you might be disappointed to learn the Swarmfire lacks tactical rails. Still there’s really not much that it needs added on. Even without a scope or flip-up sight, accuracy isn’t a big issue since you’ve got ammo to spare. If that first dart misses, there’s a good chance the second or third will find the target. A light might help if your battlefield’s dark, but that might be the only thing that could make this gun that much more useful.

Thanks to the muzzle loading design, the Swarmfire is virtually completely safe from the jams that can happen when using a magazine or drum-fed blaster. The downside is, of course, that each dart will have to be loaded one at a time, so be sure to take cover when it’s time to reload since you might be at it for a while. With that in mind, even though you get twenty darts at your disposal, maybe it’s best to just blow through them all since once you’re out you’re going to be vulnerable. It’s probably a good idea to carry a backup like the Strikefire or the upcoming Speedload 6 for a quick surprise if someones tries to take advantage of your reload time.

Who Should Get The Swarmfire

If you’re looking to bring plenty of darts to a war, then the Swarmfire may just be the blaster you’re after. Anyone with a love for machine-gun style action is going to be tempted by this weapon.

Bringing that many darts into a fight is always fun, so this gun arriving on the scene means 2011 is going to be an even better year for Nerf’s Dart Tag line.[/vc_column_text][/vc_column][/vc_row]