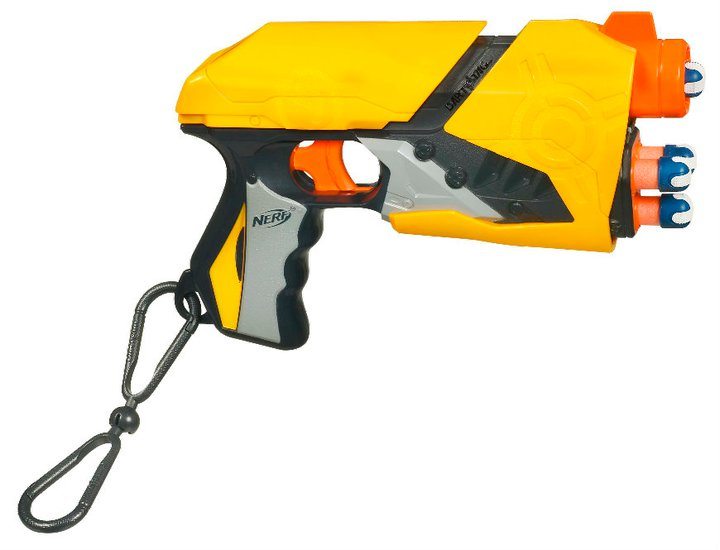 In Nerf, winning is all about superior firepower, tactics, and stealth. The Nerf Dart Tag Sharp Shot is one of the most easily concealed and easily carried Nerf Tag guns, optimized for quick, mid-range shots and ambushes in the field.

The gun fires one dart at a time and has an ammo holder for four additional darts. The bottom of the gun features a handy belt clip that snaps away when you need to pull the gun into your hand quickly.

What The Sharp Shot is Good For

The Sharp Shot is one of the best choices for new entrants to the wide world of Nerf. The gun is very accurate and useful for its price range, retailing for far less than other Nerf weapons. The ergonomic design fits most hands perfectly and comfortably. Kids and adults alike will have no problem operating the Sharp Shot without hassle.

Not only is this dart gun an ideal choice for newbies looking to get a hold of their first Nerf weapon for a match, or for pros looking for an extremely accurate sidearm for situations where a larger Nerf gun just wont do. The Sharp Shot excels in narrow spaces, unlike the Raider or another similarly-sized Nerf rifle, as Nerf guns of that class are used for laying down cover fire, sweeping through multiple enemies, or neutralizing players with extra body armor. Pursuing another player through a narrow alleyway or hall? The Sharp Shot allows players to get in close and get personal. Launching an ambush attack from a bush in an outdoor Nerf campaign? Hide in the foliage and open fire with the compact Sharp Shot.

Tuned for stealth and a quick trigger finger, the Sharp Shot makes eliminating enemies during Varied CTF, Nerf Zombie, Free for All, and Assassin easy. Since the blaster is easily concealed in a coat or pocket, its perfect for making a quick strike during a Nerf Assassin round. Lugging around a larger rifle will reveal your intentions and your position, so the Sharp Shot is a much better choice for players looking to get in and get out.

A Bargain of a Nerf Gun

Parents who want a bargain on a Nerf gun for the kids should consider the Sharp Shot. Its a perfect size for young children and lacks an automatic of semi-automatic fire feature, which means less darts to clean up.

Players with sharp aim will get a lot of use from the Sharp Shot. A player armed with two Sharp Shots could easily take down a player armed with a Raider or a Swarmfire. Its all about the accuracy, and sacrificing mobility when using a larger Nerf weapon will compromise the mission if the enemy team is armed with tactical small arms.

Modders and hackers love the Sharp Shot for its mutability. Taking apart the gun is as simple as undoing a few screws. The Sharp Shot can easily be updated with new spring mechanisms and other basement mods that increase distance and accuracy.

The Sharp Shot – In Summary

Because the Sharp Shot is economical and effective, it is the perfect choice for old pros and newbies alike looking to get the most out of a Nerf weapon. The Nerf Dart Tag Sharp Shot capitalizes on Hasbros decades of replicating the science of real firearms in safe and fun toys for kids and adults of all ages.

Pick up a Sharp Shot and join a backyard Nerf war, or stuff it in your crews ammo box and haul it along for a full-scale Nerf Armageddon. Whatever you’re looking for, the Sharp Shot is one of the best Nerf guns on the market.