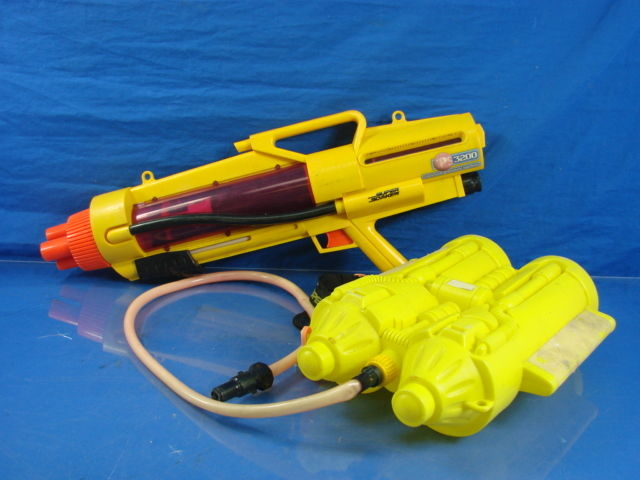 As most of the country begins to defrost, that means we are getting close to Super Soaker season. For the most part, I prefer the dart blasters, but who does not love a good water blaster fight on a hot day? It is a lot of fun to occasionally sneak a Super Soaker into a normal Nerf battle just for the “What the hell was that?” factor. But, you did not hear that from me. Anyway, below are my top 5 Super Soakers of all time.

They do not make them like this anymore. It was discontinued in 2001. The CPS 3200 was a backpack based water gun. This blaster was more powerful, held a lot more water, and was bigger than the blasters you get in the store today. This Super Soaker can hold up to two gallons of water, and the gun is relatively light, since the water is on your back. There were four different nozzle settings based on range and power. If you are lucky, you might come across one on eBay.

This is the original that came out in 1989. It changed the world of water gun fights for good. With a few pumps, you could send water flying ridiculous distances. It was not a pool party in the early ‘90s if you did not have a few of these bad boys on hand.

The Scatterblast is great because it is so versatile. There are five different nozzle settings depending on what you want to do. If you want to accurately shoot someone who is 25 feet away, there is a setting for that. If you want to totally drench someone close by, you can do that as well.

The nice thing about the Shotwave is that you can carry it discreetly. This makes it ideal for surprise attack on friends, colleagues, and mailmen (but seriously, be nice to the mailman!) This pump action water gun can reach up to 25 feet and has a ten ounce water clip. The clips can be secured on your belt for quick access and reloading. The Shotwave is the newest Super Soaker and will likely dominate 2014.

The Tornado Strike is an easy to handle, light gun that packs a powerful blast that goes for long distances. It comes with water clips for quick reloading. With all three clips, you can fire off about 36 shots. There is also a spinning barrel that produces interesting streams that give the Tornado Strike its name. In addition, there is a detachable stock for increased aiming abilities.

Is your favorite Super Soaker not listed? Tell me about it!