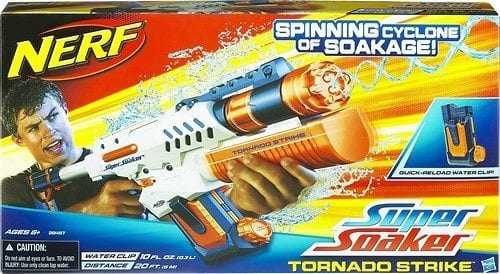 The Super Soaker Tornado Strike is part of the super soaker series by Nerf. Below are some of the features, as well as other helpful information about this super soaker gun.

Features
One of the best features of the Tornado Strike is the range. You will be able to shoot water as far as 20 feet away, so you can see that the range is impressive.

The Tornado Blaster also comes with a spinning barrel, as well as detachable stock and even a water clip. Not only does it feature all of these cool things, but it even has tactical rails. One of the best things about the detachable stock is that you can adjust it to suit your reach.

As for the amount of shots that you can take with this particular gun, you can take about 10-12 shots with it.

How Does It Compare To Other Guns
The Tornado Strike is one of the best supersoaker guns out there, especially when you compare it to other guns. Let’s compare it to the Nerf super soaker Lightningstorm. The Lightningstorm is able to shoot water up to 25 feet, while the Tornado gun shoots up to 20 feet.

The Lightningstorm soaker holds up to 37-ounces of water, while the Tornado holds a little less water. Also, it is worth noting that the Strike is lighter and less bulkier than the Lightning gun.

When compared to other guns such as the Scatter Blast or the Microburst, the Tornado is a little bit on the stiff side, which means that some people may find it a little difficult when it comes to squeezing the trigger. If have have about three ammo clips, then the Strike can fire off around 36 shots in total, while the Scatter Blast can shoot a total of 40 shots.

It is a high-end gun, and it packs a powerful blast and it is relatively easy to handle. It is not a bad super soaker, and it is worth every single penny. If you are looking for a great water gun, then look no further than this gun right here.