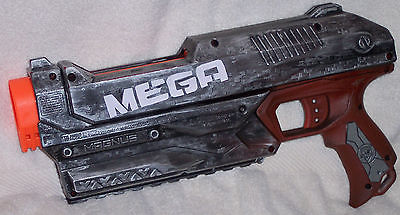 In many Nerf battles, the key to success is being able to sneak up on your opponent and take him out without being detected. A loud clunky gun will not allow you to do this. This is when it is imperative that you have a good stealth mode blaster in your arsenal. I took an informal survey of my colleagues to see which stealth mode blasters they prefer. Below are the top five along with a description of each and why they are suited for quiet attacks.

The Centurion is a single-fire dart blaster that uses a reverse plunger mechanism to fire. It has two tactical rails, a six dart clip, integrated shoulder stock, and folding bipod. It is the longest Nerf blaster at 41 inches. The reason this is great for stealth mode is its 100 foot range. You can set up camp outside of your enemy’s camp and pick them off. There currently are no Nerf blasters that have the Centurion’s range.

If you are at all familiar with this blog, you know I am a big fan of the RapidStrike. And, the people I surveyed just confirmed its greatness. The RapidStrike is an automatic that can fire all eighteen darts in its cartridge in under six seconds. It can also get decent distance at 75 feet. This means that you can essentially have terrible aim and nail people from a good distance. Its one downfall is that it is not the quietest. You will want to keep your distance.

If you are at all in touch with the world of Nerf, you know that the Magnus is the blaster that everyone is talking about. It is a fairly small handgun that is able to get good range of 85 feet. Unlike the two weapons above it on this list, the Magnus is good for both sniping AND infiltration. This is a must have secondary gun in anyone’s arsenal.

Yes. It is yet another N-Strike Elite gun. What can I say? It is a great series. The Triad can fit in your pocket. It is a single-fire direct plunger dart blaster with a stock capacity of three. You may wonder why this is on the list instead of the Jolt, which is much smaller. The reason is the Triad has a higher capacity, higher power, an intelligent air restrictor system, and better air seal.

This is the only discontinued blaster on the list. Due to its weight and size, this is another sniper only gun. However, it does get good range and accuracy and comes with all sorts of mods. It was succeeded by the Retaliator, but the Recon is still preferred by many. Discontinued. To buy, try eBay

What do you use for stealth mode? Let me know in the comments!

Would you use this Longshot?