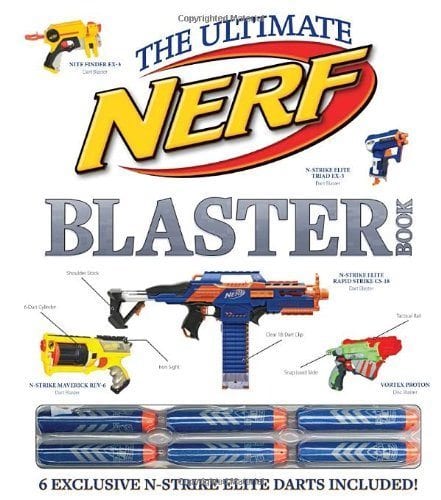 I recently finished reading this beauty, and although there are plenty of reviews out there already, I would be remiss if I did not do my own. The author Nathaniel Marunas consolidated all of the information as best as he could form his research on the internet and at Hasbro headquarters. For those of you keeping score at home, that was over 40 years of foam history across the three companies that have owned Nerf. Nerf even licensed the effort.

For those adults Nerf fans out there, I should make it clear that this book is geared toward kids. Even though there are much older player everywhere, the intended audience for the book is eight and older. This is in no way a comprehensive guide to all of the Nerf arsenal from day one, though there is a brief history of the brand’s beginnings.

N-Strike Blasters Are the Focus

N-Strike blasters from 2004 to present take up the majority of the book’s blaster listings. Sure, there is a little bit about the different types of ammunition over the years and how the first blaster was developed along with the original Nerf ball, but the pre-N-Strike history is lacking. In case you do not have enough darts, the book comes with six exclusive N-Strike Elite camo darts packaged in the cover.

Both current and discontinued types of Nerf ammo are explained in the book. Everything from the original Mega Darts to Vortex discs are covered. On each page, you get the technical specs for some of the blasters, and each chapter is divided in to blaster classes, like heavy, medium, light, and accessories. Various schemes and paintjobs are not explored in great detail though.

Terminology Is Great for the Novice

Priming a blaster, direct plungers, and other common terms and lingo used in the Nerf blaster world are explained to those who may be unfamiliar. Kids and their parents can use the technical info to help them understand simple things like why a dart tag dart does not work in an N-Strike magazine or the differences between the various blasters.

There are nice little trivia touches such as measurements and release date info for the blasters, but unfortunately, the ranges for each blaster do not specify if the shot is flat or angled. The design process and timeline pages were my favorite parts in the book. Having wondered about how long it takes for blasters to hit production and how designers conceive of and test blasters, I could not get enough of the process pages.

Overall, as a Nerf nut, I loved the book, but I could see a lot of the older guys in the community not liking it. I would strongly recommend the book to kids who are just getting into the wonders of Nerf.