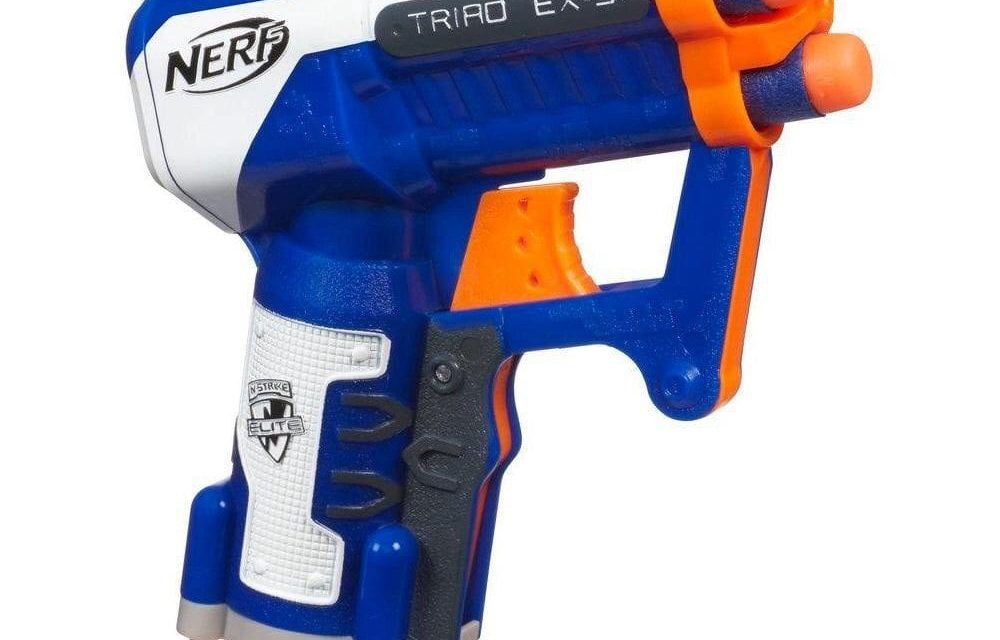 [singlepic id=539 w=450 float=right]If your family is like mine, then you can never have too many Nerf guns. Around here we are always in high alert for the next Nerf war. One child sneaks up on the other, and then Dad gets caught in the crossfire. Dad grabs a gun of his own. Before you know it the whole family is in an uncontrolled shoot out. Ducking behind couches and shooting around tables.

The Triad EX-3 may be at the bottom of the line in size, and with only 3 darts is not a high capacity shooter. however,these same features are what make it perfect as a sneak attack or super secret spy gun. We love to use it to join the kids. With this little shooter it is so easy to casually join the game and we are rewarded with squeals if joy and laughter. With the power to shoot a dart up to 75 feet, they are surprised every time. This gun is easy to reload and the smart design of the pull down handle cocking mechanism makes it easier to keep up with the larger capacity guns, which allows Dad to amaze the kids with his “awesome skills”.

We purchased many of ours at Christmas when every cent counts. I must admit, that I considered the cheaper Air Warriors line sitting next to the Nerf guns on the shelves, but they just did not seem as solid as the Nerf guns. The plastic was more easily bent and knowing the beating our blasters get, I just didn’t trust them to hold up. After a friend of the kids, brought his over, I know I made the right choice. Our blaster were not only more solid, but they also fired more consistently. By the end of the war, the Air Warrior was left on the ground abandoned by all. The time we play with our kids are the memories they will have with them for a lifetime. I want them to be of happiness playing with a much loved toy, not of the frustration of cheap broken toys.