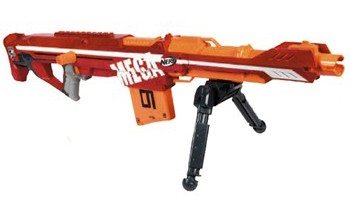 The New N-Strike Elite Centurion. Up to 100-Feet of Fun

One of the best parts of a Nerf war is catching unsuspecting targets off guard when you shoot them and they don’t even see it coming. With most other Nerf guns, this is only possible from close range when sneaking up behind your enemy. However, with the new N-Strike Elite Centurion, you will be able to surprise your opponent from over 100-feet away.

Nerf is making history with its longest-range Nerf gun ever. This sniper-style Nerf gun has a 42” long barrel that will increase your aim and add more velocity to your shot. Part of the new MEGA line, the Centurion will use Elite Mega Darts, a type of ammunition dart that is new to Nerf. Twice the size of normal Nerf ammunition, the added size also contributes to the ability to travel such a long distance. With bigger darts, it is possible to gain more momentum; therefore it is able to fly further.[easyazon_block add_to_cart=”default” align=”right” asin=”B00BG8F0IW” cloaking=”default” layout=”left” localization=”default” locale=”US” nofollow=”default” new_window=”default” tag=”126p86-20″]

The clip of the Centurion is able to hold up to six Elite Mega Darts. This is pretty good for a sniper-like shooter. However, it will be one of the slower loading models, as you will have to cock the barrel each time you want to shoot it.

While other Nerf guns, like the Stampede ECS, may look similar to the new Centurion, this is truly an original shooter and there is not much else like it on the market. No other gun boasts that it can shoot up to 100-feet, as this one does. If Nerf can add a larger clip, or faster loading system, this may be considered one of the most effective guns to add to your Nerf collection. With the stand that it comes with and an optional scope, you have all you need included in this one gun.

Retailing at roughly $50, this makes the Centurion a mid-range gun to add to your arsenal. And, being from the new N-Strike Elite series, it will be able to withstand your battles, no matter the conditions. It’s truly a great addition for any Nerf lover.

The N-Strike Elite Centurion is sure to change how people approach their Nerf battles. You will no longer have to be in close proximity of your opponent to deliver a winning shot. Instead, you can wait out your next victim until they come into your shooting range, which will now be a further distance than ever before.