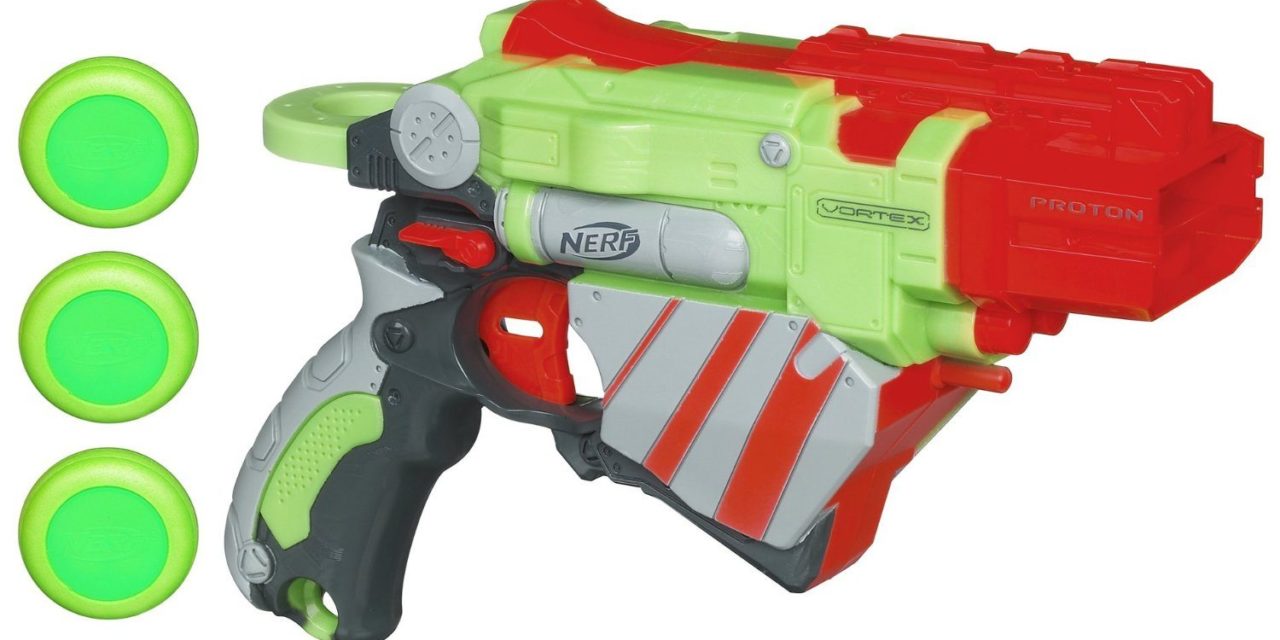 Throughout The Art of War, Sun Tzu frequently emphasizes and re-emphasizes the importance of versatility. In fact, the whole book is basically telling you “Be versatile,” there it is, the art of war for you. This is just as true on the Nerf battlefield as it is on any other, and versatility is what the Nerf Vortex Proton Blaster delivers.

You probably have a favorite semi-automatic, long range weapon that you use as your primary. Perhaps a Vulcan or a Raider. Those are fine guns for when the action gets heavy. Unfortunately, they leave something to be desired when it comes to subtlety, sneakiness. They’re not much good when you’re low on ammo and you need a last resort. They’re awesome as primary weapons, but not very flexible beyond that.[easyazon_block add_to_cart=”default” align=”right” asin=”B00E1DEAIA” cloaking=”default” layout=”left” localization=”default” locale=”US” nofollow=”default” new_window=”default” tag=”126p86-20″]

The Vortex Proton Blaster provides quite a bit of versatility for such a little gun, and whatever else you take into battle with you, you’ll likely keep your Proton Blaster on your person at all times, no matter what rules you’re playing by.

Strong Points of the Proton

The small, lightweight nature of the gun makes it very easy to carry on you without even worrying about until you realize it. Compared to the Maverick and other sidearms, it really is surprisingly portable. The gun itself comes with three discs, which should be enough for those emergency shootouts where you need to pop a shot off at your opponent to get out of the corner. The discs tuck easily into the pockets of your vest or shirt so that you can access them when needed without smashing them. Just try firing a dart that’s been smooshed in your back pocket and see how far that gets you.

The gun is also easy to reload, and that really counts when your back’s against the wall. Fumbling and dropping a dart is the easiest thing in the world when you’re stuck in a tense scenario, but the easy-reload action of the Proton Blaster means less time begging for a timeout and more time forcing the other team to do the same.

We Love the New Ammo!

The Vortex discs provide a surprising degree of range and accuracy for such a tiny gun. Most sidearms are close-range-only affairs. This can be unfortunate: the last thing you need when you’re cornered and out of ammo is a gun that can’t shoot straight. The Vortex discs operate like little frisbees, snapping through the air at a decent speed.

The range and accuracy of the gun not only help to secure victory in those tense moments where accuracy counts, they also allow for more stealthy plays. With a standard one-shot dart gun, you need to sneak right up on your target. The Vortex Proton Blaster gives you an effective range of several yards, lending a tactical advantage when you need to make the shot on the sly.

How Does it Compare?

The Vortex guns tend to be smaller than other Nerf guns for the simple fact that their flat, disc-shaped bullets are quite a bit smaller. Where an N-Strike Vulcan needs an enormous ammo belt, a Vortex rifle can spit out the same number of rounds with a simple spring loaded clip which, by the way, makes for some really fun, cool situations when reloading. Dropping an empty magazine out the bottom of a Vortex rifle and sliding another one in makes you feel just like Chow Yun Fat in “Hard Boiled.”

Why You Should Get it

For speed, accuracy, range and, most of all, versatility, the Proton Blaster really delivers, and at a budget price.