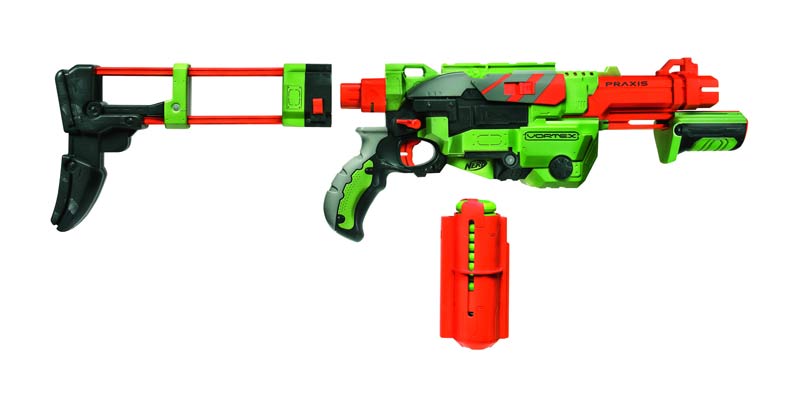 If you want a really customizable weapon you can use in a variety of Nerf battles, you probably want to take a look at the Nerf Vortex Praxis Blaster. It’s part of the Vortex line of weapons that shoot little green discs instead of the darts or mini darts.

The Praxis comes with a separate magazine so it’s easy to reload. You can decide if you want a two-handed weapon for accuracy, or a one-handed weapon for speed since the shoulder stock is removable. The discs fly really, really far and this gun is pretty accurate. It works with pump-action that is easy to use, and it doesn’t jam like a lot of other Nerf weapons. You can decide whether you want to be a sniper, a front man, or whatever else your team needs without having to bring more than one weapon to the battle.[easyazon_block add_to_cart=”default” align=”right” asin=”B004SKX884″ cloaking=”default” layout=”left” localization=”default” locale=”US” nofollow=”default” new_window=”default” tag=”126p86-20″]

If you haven’t tried out a Vortex yet, you don’t know what you’re missing. The discs fly way further than the darts ever did, you can hit someone from 40 feet away. The Praxis comes with ten little green discs that fit into the magazine, which can fit in your pocket. You can buy extra discs and a second magazine for really rapid reloading. The Praxis comes with ten discs, and the magazine holds ten at a time. The discs themselves are a little more than an inch across and fly amazingly far. Be careful, they sting a little at close range. They also blend in on the grass and get lost super easy. Discs are better than darts for a couple of reasons, they fly further and they also don’t have those rubber suction cups that never work. You don’t have to worry about your little brother getting into your arsenal and choking on anything.

The Praxis looks a lot like the Vortex Nitron, but it’s a lot lighter and quieter. It has almost the same interchangeable parts aS the N-Strike Recon CS-6, but with discs instead of darts so the Praxis shoots a lot farther than the Recon. It holds more ammo than a lot of other blasters, and it’s a lot easier to load than a dart weapon. We like the Praxis because it has the speed, accuracy, and ammo to fit any position on the battlefield. It’s lighter than the battery-powered automatic weapons, but it still feels sturdy and solid in your hands.

There’s not a lot bad to say about the Praxis. The discs can be pretty inaccurate outdoors when there is any breeze, and they get lost really easy, but that’s the same with any Vortex weapon. You may find yourself leaving the shoulder stock at home, but you won’t regret the higher ammo capacity the Praxis offers.