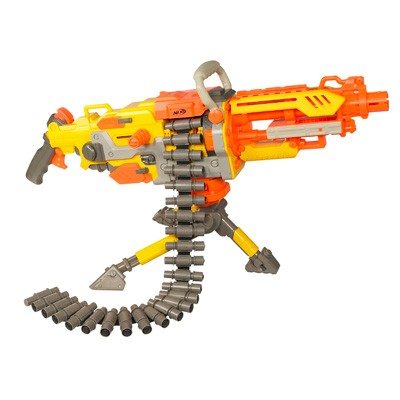 The N-Strike Vulcan EBF 25 is the largest full auto Nerf gun Hasbro has ever released. Upon its release earlier this year, Nerfers everywhere flooded stores just to grab one (IT WAS CRAZY). Priced at a reasonable $42, the Vulcan has become a highly sought after weapon for Nerf arsenals everywhere.

Firing at a rate of 3 Nerf darts per second, this belt fed Nerf gun is the support weapon of choice. Combine this with the Buzzsaw and you WILL BE the support man on your team.

Other features on the Nerf Vulcan include a removable tripod for those special Rambo-like occasions, and a single shot mode when your feeling some accuracy is in order.

The best part is 3 shots per second is just the beginning, much more can be achieved with a larger power source.