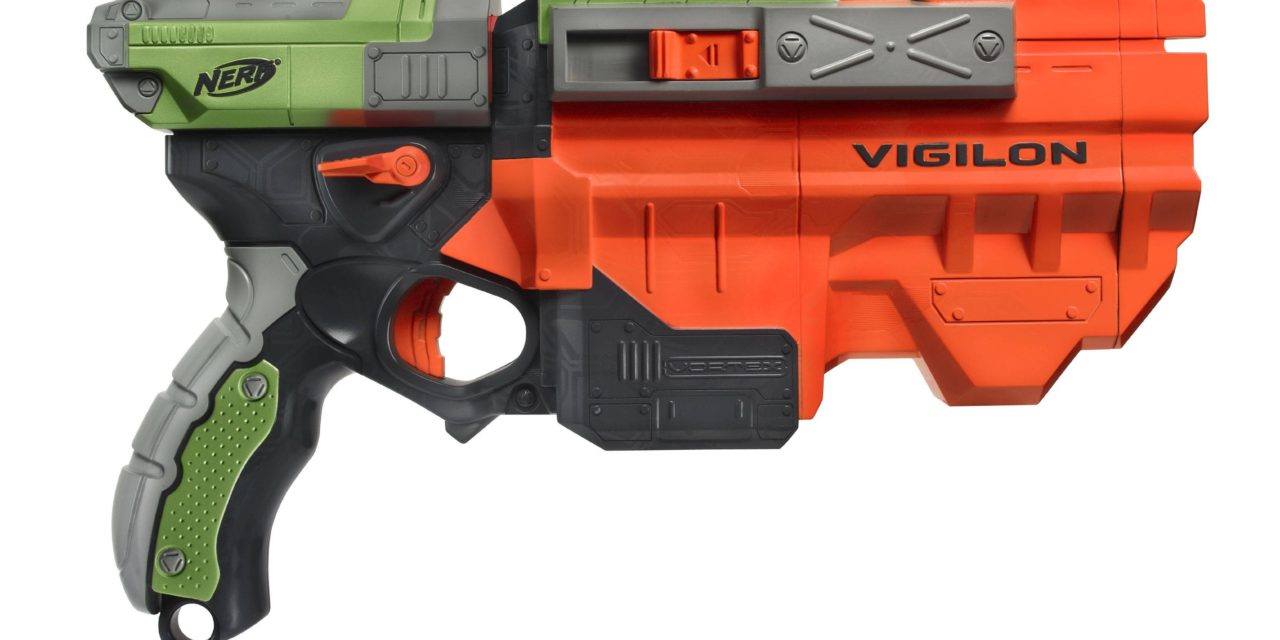 [vc_row][vc_column][vc_column_text]For anyone who hasn’t taken a Vortex Blaster out for a game yet, these innovative new guns may just prove to be the next wave in foam dart guns. The name comes from their use of semi-hard foam rubber discs in place of darts, or in some cases, in addition to darts.

A New Kind of Blaster, Evolved

These little discs typically come loaded in spring loaded clips just like a real life semi-automatic pistol. They shoot out like little frisbees, the gun putting a spin on each one. The additional range and accuracy provided by these guns is simply mind boggling. Some of these Vortex Blasters can hit a target at literally twice the practical range of a traditional dart-based Nerf gun.

One of the greatest benefits to packing a Vortex Blaster or two in the next shootout is actually ammo. Where the traditional blasters are often reloaded a dart at a time or with enormous ammunition cartridges that have to be lugged around in a backpack, you can fit three or four Vortex clips in your pocket at a time. When you run out, just release the clip and slap another one in its place. This is the closest Nerf has ever come to a real life John Woo movie, which is, after all, half the reason we play with these guns in the first place.[easyazon_block add_to_cart=”default” align=”right” asin=”B00E1DEAG2″ cloaking=”default” layout=”left” localization=”default” locale=”US” nofollow=”default” new_window=”default” tag=”126p86-20″]

In the case of the Nerf Vortex Vigilon Blaster, you get five discs to a clip. With a few extra clips, you’ve got twenty rounds on you at all times. This isn’t bad for a cheap sidearm. This is the kind of performance you usually expect from a gun that cost four times as much as this one.

Even the Proton Blaster carries three discs at a time. This gun is the equivalent of the N-strike one-shot gun from the dart line, but with two extra bullets, greater accuracy and greater range.

The pump action on the Vigilon is fast and smooth, a relief for anyone who’s had to deal with clunky pump action on some of the lesser foam guns out there that tend to jam up and start leaking air in the first week out of the box. The Vigilon is made to surprisingly high standards of quality and really underlines Nerf’s effort to serve as an alternative to airsoft and paintball, throwing their hat into the serious competition ring. If they keep producing guns like this, Nerf is going to wind up getting coverage on ESPN before too long.

A tip for people who are new to the Vortex Blaster series or who have never owned or operated an automatic weapon: keep the clips unloaded between shootouts. The spring-based action on ammunition magazines can wear down over time if it’s kept full. The metal coils eventually take whatever shape they’re kept in, so if you keep it fully loaded, then you keep the springs stamped down all week long, and eventually, the spring just takes that shape and has less “push” when you need it the most. The end result: Your gun keeps jamming and refusing to pop up the next round because the spring is week. Keep it unloaded and the spring will stay in like-new condition for years to come.

If you want an easy way to keep ammo, the Nerf N-Strike Tactical Vest, while designed for the N-Strike, dart-based series, actually serves as a fine makeshift vest for Vortexers. The pouches are perfect for carrying extra ammo clips, and the straps only require a little modification to be able to hold a couple extra magazines.[/vc_column_text][/vc_column][/vc_row]