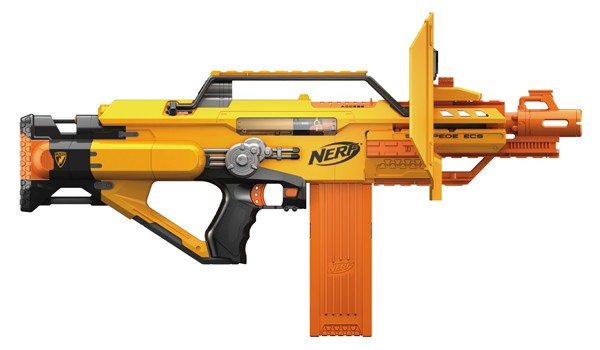 Say Hello To The Next Generation of Full-Auto Greatness

For Nerf lovers who are looking for a true battle experience, the Nerf Stampede ECS-50 is sure to turn you into a real warrior. The Stampede ECS is a fully automatic rifle, so you no longer have to stop to load your ammo and cock the gun to fire: Simply insert the clip, pull the trigger, and the gun blasts out an amazing 3 darts per second. By combing the ease of the automatic system with some awesome accessories in the Stampede ECS, Nerf has raised the bar yet again!

This gun is made with realism of combat in mind and the accessories make it perfect for all sorts of battle situations. One of the best things about the Stampede is that it is designed so you can use it for either stealth or offensive attacks. The included bipod functions as both a stand, so you can stay stationary and attack your friends from the ground, and as a handle, so you can walk and shoot at the same time. You can shift from attack to defensive mode with the blast shield that helps you fend off attacks from your friends. The package includes three extended 18-dart clips and one 6-dart clip, so you have plenty of darts on hand and a quick and easy way to reload them.[easyazon_block add_to_cart=”default” align=”right” asin=”B003774W6Q” cloaking=”default” layout=”left” localization=”default” locale=”US” nofollow=”default” new_window=”default” tag=”126p86-20″]

The Stampede ECS is a great gun for fans that enjoyed the N-Strike Vulcan and Recon CS-6, as both dart guns have features similar to the Stampede. The Vulcan is similar in function, as it also is a fully automatic Nerf gun, and the Recon shares a similar grip and clip location.

The Stampede is one of the larger Nerf guns out there, comparable in size to the Vulcan, so it’s recommended mainly for older people.

The drawback to this blaster is it may also end up being more expensive to own and operate as it does require 6 D batteries that aren’t included in the package. However, this really isn’t a factor for most Nerfers.

What is The Stampede Good For?

What exactly is this blaster good for? For one (and this is a BIG one), it happens to be a great companion piece in an arsenal of mainly smaller guns, as it adds bulk and power to the collection, as well as speed.

All in all, Nerf has really outdone itself with the Stampede ECS. It is their second fully automatic dart gun, and is focused on making it feel like you have the real thing. The gun even gives a little kick back while you’re firing, adding to the fun and realism of firing such a large gun.

Another thing to note, is that by having the darts loaded through clips, instead of ammo belts (like the Vulcan), you don’t have to waste time with loading the clip into the gun, or worry about the clip itself jamming the gun while moving around – which the ammo belt on the Vulcan was notorious for doing. With the Stampede, the loading of darts is left solely to spring loaded tension of the clip, instead of a clunky gear box.

The Stampeded ECS is perfect to add to your collection of blasters and is fun for both kids and adults, and a must buy for any Nerf fan.