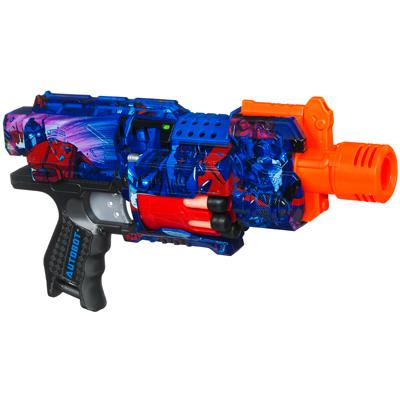 Every time a new Transformers movie is released, the toy section is flooded with dozens of cheap pieces of licensed merchandise. Some of these are pretty fun, others will break the minute you take them out of the box. When the rights holders contacted Nerf, though, Nerf were smart about it. Rather than producing some cheap plastic toy, they simply took one of their top rated guns, the Barricade RV-10, and created a special limited edition version of it for Hasbro.

A Barricade RV-10 With a Transformers’ Touch

The gun itself works just like a Barricade RV-10. If you haven’t played with one of these yet, it’s really a step forward in Nerf handguns. This sidearm blaster utilizes a ten dart rotating barrel, like many Nerf pistols, but unlike those six and eight shot guns, this one features a motorized, semi-automatic chamber.

This approach combines the efficiency and rate of fire of an automatic Nerf rifle with the speed and usability of a sidearm. It has a surprising degree of range and accuracy, and without having to constantly hand-pump the pistol, you get better performance in tight spots.

The rail and stock attachment isn’t just for show. This gun can easily be used as a long-range primary weapon. While not quite as accurate as a longshot, it can hit much farther ranges than most blasters and is great for anything from close to mid-long range shootouts, giving a tactical advantage in almost any situation.

The battery-powered motorized chamber makes it a perfect fit for the Transformers franchise. The gentle hum and whir of a battery-powered electronic motor in your hand almost makes you feel like you’re holding a little robot buddy that helps you knock out your opponents.

The design combines Optimus Prime’s red and blue color scheme with the oranges and gun-metal gray tones we’ve come to associate with the Nerf brand. With an image of Optimus Prime on the rear of the gun and AUTOBOT printed in cool blue on the grip, it’s really a cool looking gun. It even comes in a cool looking box: gun metal gray with an 80’s style computer grid and red lettering, with the old-school Transformers logo emblazoned proudly on the front.

As far as licensed toys go, there are good and bad ones, and the Optimus Prime RV-10 is one of the best solely because the original RV-10 is already a highly rated nerf gun.