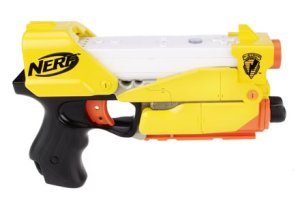 A Multi Use Blaster – The Switch Shot

The Switch Shot EX-3 Blaster has rave reviews from owners who claim that it is the best light gun/foam darter shooter on the market. What makes it so amazing is it comes fully equipped with working parts for that extra realistic “Nerf” touch.

Regardless that it was made for the hit video game Wii Nerf N-Strike, it still can be used in nerf wars. That fact alone makes buying the video game a no-brainer. Its cool looks make it one of the more interesting Nerf pistols out there.[easyazon_block add_to_cart=”default” align=”right” asin=”B0018ELOXY” cloaking=”default” layout=”left” localization=”default” locale=”US” nofollow=”default” new_window=”default” tag=”126p86-20″]

A Note on Performance

As far as performance goes many claim it is one of Nerf’s “weaker” Nerf guns out there, but to today’s Nerfer that means nothing. Weaker only means “potential.”Potential to add some sick nerf gun modifications to it.