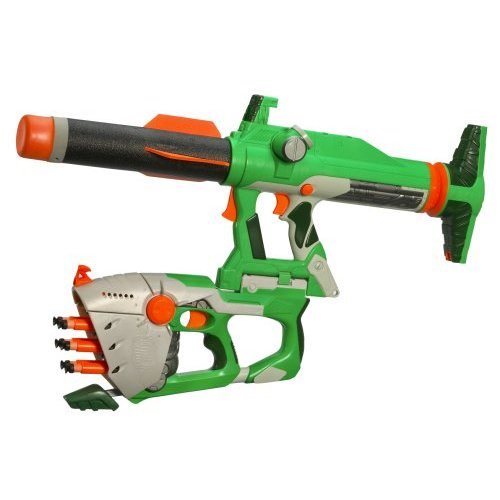 Based on the popular Marvel comic book character, The Incredible Hulk, the Abomination Blaster is a massive 3-in-one Nerf gun combo that was made to bring down the toughest of opponents. The Abomination blaster features detachable Mega Missile Launcher and a Multi Dart Blaster to unleash the optimum firepower on your enemies!

The Nerf Hulk Abomination Blaster is modeled after the Nerf Unity Power System. With the firepower of the Mega Missile, you will shoot 12 inch long darts up to 60 feet away to obliterate your enemies. If you are caught off-guard and an opponent gets too close, then break out the Multi Dart Blaster to rapid-fire 6 projectiles directly at them. This semi-automatic blaster needs only one pump to fire off a round of projectiles that are sure to pepper the enemy. If you are looking for the ultimate Nerf gun package, then the Nerf Hulk Abomination Blaster is for you!