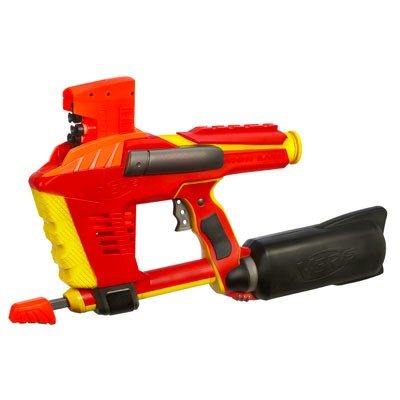 In your battle against your arch enemy, that evil that is your little brother or sister (coworker or hall resident), why not be supplied by Stark Industries and Iron Man himself! The Nerf Iron Man Magstrike N.R.F. 425 Blaster is a new generation of the Nerf MagStrike with the Iron Man touch.

The Blaster comes with a ten-dart clip of micro foam darts and a vinyl sheet of targets. This amazing technology from Iron Man can rapid-fire its entire load of 10 micro darts up to 30 feet! With such a huge volume of Nerf darts flying in the air, your opponent won’t have a chance to get off his first shot!

The Blasters firing action comes from compressed air that is pumped into the storage chamber. Twenty quick pumps of the pump handle should give you all the firing power you need. All 10 foam darts in the clip can be fired in an amazing 2 seconds, or you can shoot in 1 to 2 shot bursts by just tapping the trigger lightly. As you fire, the clip slides up and down the gun and the sound of the Blaster firing sounds like a series of small explosions.

The Iron Man Magstrike N.R.F. is truly a Magstrike on steroids.