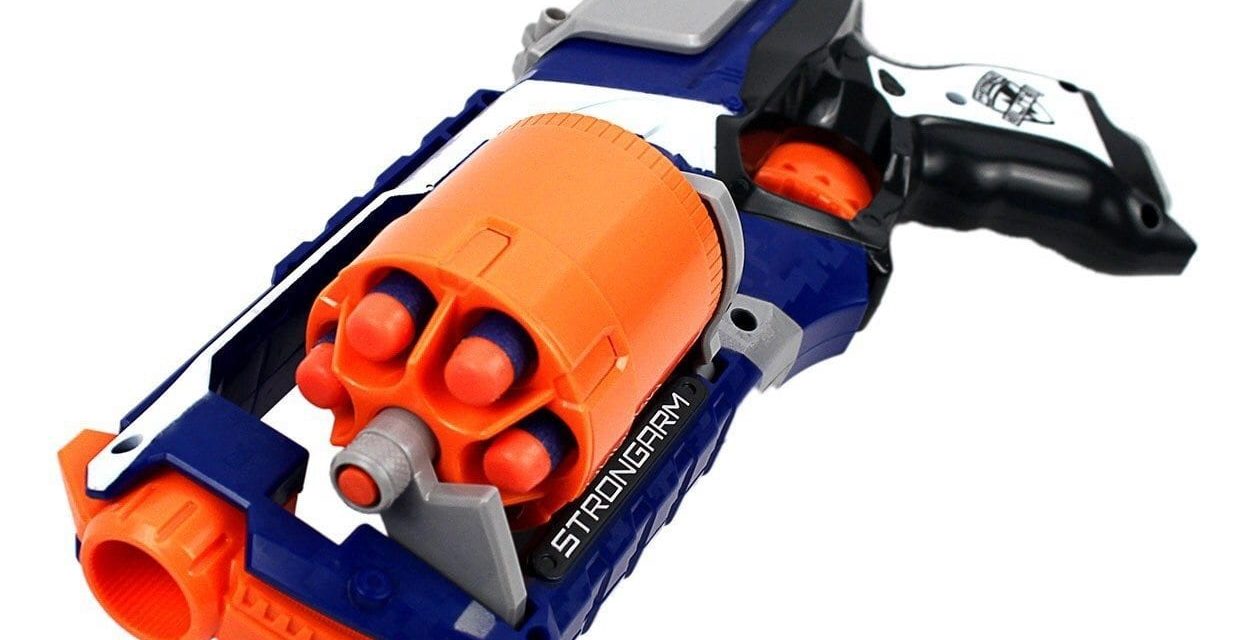 Are you looking for a Nerf pistol with the range of a rifle and a cowboy’s attitude? The N-Strike Elite Strongarm Blaster is the dart gun you’ve been looking for. This six shooter is not only a great back-up for any of the bigger Nerf guns, but it’s also powerful enough to be used on its own. At the fair price of $13([easyazon_link asin=”B00DW1JT5G” locale=”US” new_window=”default” nofollow=”default” tag=”126p86-20″ add_to_cart=”default” cloaking=”default” localization=”default” popups=”default”]link[/easyazon_link]) it’s one of the cheapest ways to introduce any 8-year-old (or older kids) to the world of Nerf overall. Just make sure to get them something to carry extra darts so they don’t have to keep picking ones off the ground when the blaster is empty.

It’s also worth noting the reviews are pretty good. Currently there’s over 500.

As stated before, the Strongarm blaster is a revolver-style dart gun with a 6 round capacity. Instead of using a battery-powered mechanism to fire, this particular Nerf gun relies on a Slam Fire slide located on the top rear of the blaster. Its range is about the same as a Nerf rifle (around 10-25 feet), which makes it a powerful pistol compared to the others available. One unique feature the Strongarm has is the ability to fire darts rapidly. Just hold the trigger and move the Slam Fire slide each time you want to fire. Do it correctly and you’ll be able to fire darts as fast as if it was fully automatic!

When compared to other blasters in Nerf’s N-Strike series, the Strongarm blaster falls into the low to mid-range in terms of price, operation, and ammo capacity. It’s a fantastic secondary if you or your child already has one of the bigger blaster, but it’s also capable of being a good primary dart gun for first time buyers. The only downside is that you’ll need something carry extra darts in order to keep firing without rushing into an open space when playing a game of Tag or when shooting paper targets in a short amount of time. You can pick up the Strongarm blaster wherever Nerf guns are sold ([easyazon_link asin=”B00DW1JT5G” locale=”US” new_window=”default” nofollow=”default” tag=”126p86-20″ add_to_cart=”default” cloaking=”default” localization=”default” popups=”default”]my favorite place[/easyazon_link]), as well as others in the N-Strike Series’ lineup.