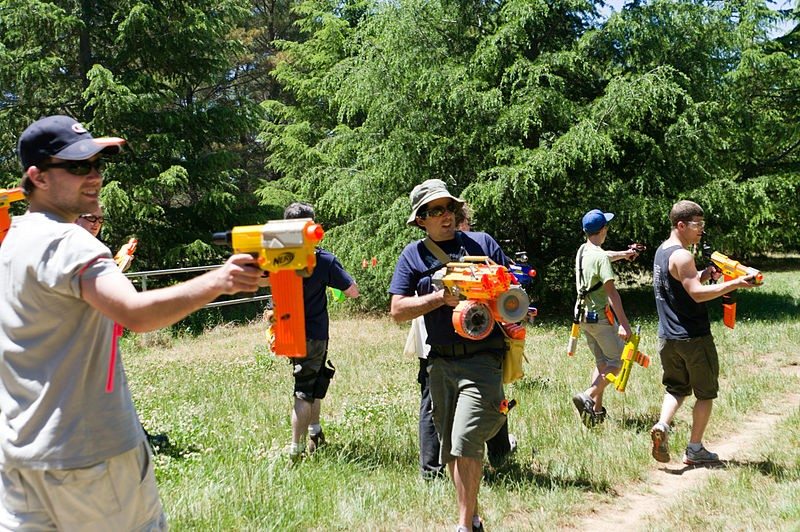 There’s no better time than summer to have a Nerf war! With friends and family on summer vacation, it’s much easier to get a large group of people together and have fun blasting each other with foam darts or Super Soakers.

Get creative. From standard battles to target shooting, there are lots of different types of activities you can do with Nerf guns. All it takes is getting some friends together, setting a few rules, and most importantly, having fun! Whether it’s just you and a small group to a massive Nerf War Turf War style event, here are some game mode ideas to try out at your next Nerf war.

Before you start, set basic ground rules and make sure everyone knows them. Have the teams be as fair and balanced as possible. Most games use a player honor system, where each person judges when they are hit, but here are some other rules to consider:

Players: Minimum of 4 (2 per team) but a larger group (6-10 people, 3-5 per team) is better. Make teams distinct via different colored clothing (like red vs. blue)

Battlefield: Can be indoor or outdoor, but must be able to be divided into two clear “territories”. The territories should be somewhat similar, have enough cover for the defenders, and contain a variety of routes for infiltration. You’ll need plenty of room, but don’t make the area too big since CTF requires a lot of running.

Objectives: Steal the “flag” (can be a ball, stuffed animal, special dart etc.) from the enemy’s base. The winning team is the one that brings the enemy’s flag back to their base without losing their own flag.

Players: At least 7, though more is better. Starting team ratio is about 1 Zombie per 6 Humans. Humans have blasters, Zombies usually have to infect by hand (but can have weapons). Zombies are temporarily stunned when shot, Humans get infected and become a Zombie when tagged.

Battlefield: Outdoors is better. Choose a decently large area that has obstacles (like trees) and enough places for Humans to hide once the Zombie horde gets bigger. This game mode can last for back-to-back rounds or a certain set time limit, depending on how many players there are.

Objectives: Humans try to be the last man standing while Zombies try to infect all the Humans.

Which game mode do you prefer? Capture the Flag or Zombies vs. Humans?