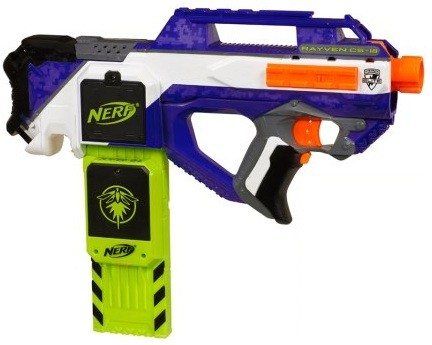 The Nerf N-Strike Elite: Rayven CS-18 Blaster is a semi-automatic 18-dart Blaster Nerf gun that also features glow-in-the-dark Nerf darts. The system is capable of charging the glow-in-the-dark darts directly on the Nerf gun unit itself via an ammo-charging clip. This unit is also compatible with other Blaster accessories like the Tactical Rail and more compatible Nerf accessories.

The Rayven CS-18 Blaster has an 18 dart capacity and can fire darts up to 75 feet away. Users can also integrate the Tactical Rail with the Rayven CS-18 to provide better aim. The Firefly Tech clip is a recharging ammunition dart pack that connects to the Rayven CS-18 and the darts are loaded into the unit so that they may be charged. Once charged, the glow-in-the-dark darts are able to be seen even in shadowy or low-light environments. When the person holds the trigger down, the motor in the Rayven CS-18 charges, spins and fires the darts.[easyazon_block add_to_cart=”default” align=”right” asin=”B009T45XVE” cloaking=”default” layout=”left” localization=”default” locale=”US” nofollow=”default” new_window=”default” tag=”126p86-20″]

The Nerf N-Strike Elite Rayven: CS-18 Blaster is a top shelf type of Nerf gun merely for the fact that it has a semi-automatic mode of firing as well as a rechargeable ammo clip capable of charging glow-in-the-dark darts. This combined with the ability to attach other Nerf accessories makes it a high-end Nerf gun.

There are other similar guns to the Nerf Rayven CS-18 like the Nerf N-Strike Elite: Firestrike Blaster and the Nerf N-Strike Elite: Stryfe Blaster. These guns look similar in design and placement of the components; although they fire and are used much differently. Like the Ravyen CS-18, the Stryfe Blaster also has an ammo clip; however the ammo clip on the Stryfe Blaster is a quick reload clip that holds six Nerf darts. Additionally, the Strfye Blaster is also compatible with the Tactical Rail accessory for better aiming.

On the other hand, the Nerf N-Strike Elite: Firestrike Blaster has a Light Beam targeting sensor that is ideal for helping to pin distant targets up to 15 feet away. While the Firestrike has a different mechanism and means of firing darts, it also may take advantage of utilizing the Tactical Rail accessory.