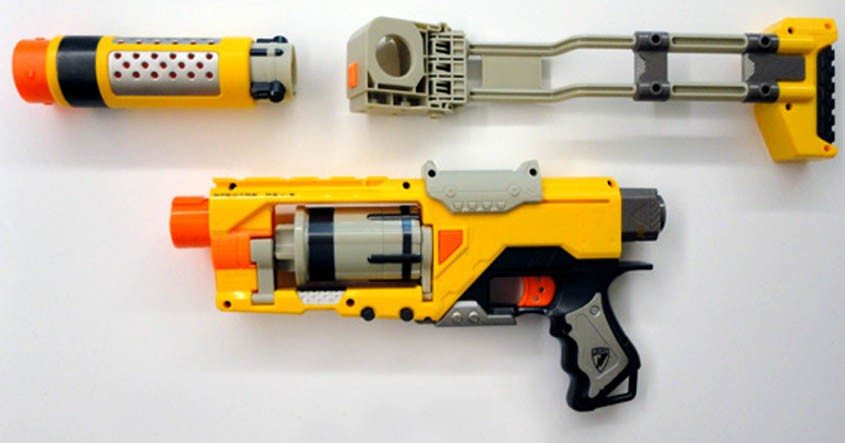 The Versatility of The Nerf Spectre

The Nerf Spectre REV-5 is maybe the most versatile weapon in the current Nerf lineup. The hook of this gun is just how customizable it is. There have been a lot of guns with a detachable scope or laser pointer or something along those lines, but the Spectre can actually be adjusted to fit just about any situation, making it the perfect backup gun, as it can fill any role should something jam or run out of ammo at just the wrong time.

When you first open the box, you’ll notice that the core of the gun is very similar to the Maverick with its .357 modeled shape and five shot rotating chamber. What makes the Spectre special, though, are the detachable stock and silencer/long barrel.[easyazon_block add_to_cart=”default” align=”right” asin=”B0046QU5EK” cloaking=”default” layout=”left” localization=”default” locale=”US” nofollow=”default” new_window=”default” tag=”126p86-20″]

This means that you have three different shapes to go with for this gun (well, four, but who wants a stock but no barrel?). If you want a backup pistol, remove the stock and the barrel for a basic Maverick style gun. If you want something for more precise long range attacks, put the stock and barrel on the gun for some medium-long range sniping. By using the long barrel but not the stock, you have a handgun that can work with a little more accuracy at a longer range than a standard maverick.

A Stock For A Pistol?

The stock is collapsible, so if you’re carrying it as a backup, you’ll probably want to carry it with the stock collapsed and the barrel attached, allowing you to reach for it as a mid-range pistol, or extend the stock to do some sniping. The gun’s effective range is around thirty feet, making it surprisingly effective for being based on the basic Maverick design.

Compatibility is a key word here, too. You can take the stock or the barrel and attach them to the N-Strike blaster, or you can snap the N-Strike attachment onto the top of the Spectre. It also fits snugly into the Tactical Vest, with or without the barrel and stock attached.

One more cool thing about the Spectre: the chamber rotates upon being cocked. The Maverick jammed up quite a bit because of its trigger-based rotating mechanism, leaving you with a misaligned chamber and five darts that won’t fire more often than not. If nothing else, the Spectre is proof that Nerf can learn from their mistakes.

Who Should Get One

So who needs this gun? Well, it’s basically a long range, mid range and short range gun all packed into one. If you want to pad out your arsenal without spending a lot of cash and hauling around fifty pounds of plastic, the Spectre’s versatility gives you three styles of attack in a single lightweight gun.

In fact, coupled with a heavy hitter like the Vulcan, you’ve pretty much got everything you need in two guns.