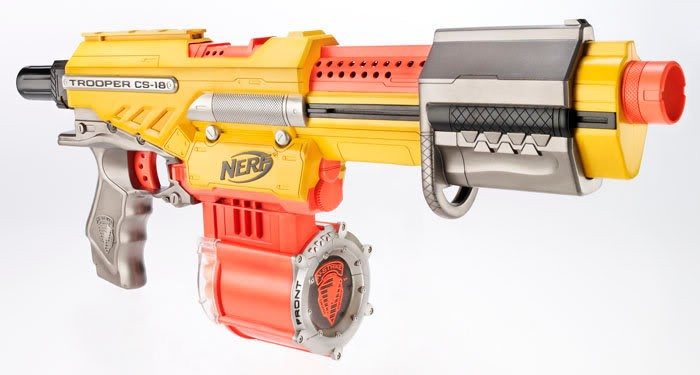 What is Special About The Alpha Trooper?

The Nerf Alpha Trooper CS-18 can assure victory to anyone who owns it! This sleek gun is not only stylish, it’s a fast rapid fire gun should be included and ranked among the other Nerf guns. Any fan of Nerf guns should have this in their arsenal. This smaller blaster is still efficient enough to accomplish and finish any mission handed to its user. Sharing the same slam-fire feature the Raider CS-35 has, and comparable in size to the Recon, the Alpha Trooper is a great hybrid of firepower and compactness. Fun to shoot and easy to handle, Nerf gun fans are sure to love it.

This classically colored schemed yellow and orange slam fire blaster is equipped with a lightweight 18-dart drum magazine to make sure that anyone who has this equipped has plenty of ammo at all times. Firing this great gun is simple as well. To fire the CS-18, one has to hold down the trigger, slide and slam the fire handle to release the darts! This is a sleek lightweight gun that never jams and also has an awesome range of over thirty feet! The CS-18 weighs on average just about five pounds making is very easy to handle and carry.

Though the Nerf Alpha Trooper CS-18 may not hold as much ammo as say, the Nerf Raider CS-35, it is still a great competitor. The CS-18 dart drum magazine is much lighter than the CS-35 making it easier to move with. Because it is lightweight and easy to operate, I’d say it is an excellent all-around-blaster perfect for just about any situation. With the CS-18 you get the speed of the Raider CS-35, but at a cheaper price.

The Nerf Alpha Trooper CS-18 is a great addition to someone’s arsenal of Nerf guns. This fast and lightweight blaster allows quick rapid fire, making it great for any situation.

Anyone who needs a slam-fire blaster that can shoot fast, but doesn’t want to pay too much for a Nerf gun, should get this blaster. It is cheaper and lighter than the Raider, yet just as fast.