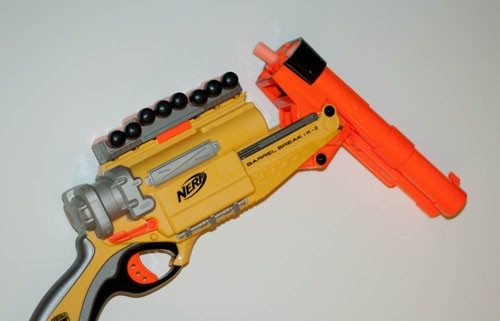 The Nerf Barrel Break IX-2 is probably the most exciting of the lower-end Nerf guns available right now. In terms of functionality, it’s a pretty standard double barrel shotgun affair, but in terms of performance, it’s quite a bit more.

Typically, these double barrel foam dart guns are kind of unwieldy. They’re always built to full size for some reason, and hauling around a three foot barrel just to shoot two darts seems a little counter productive. So the Barrel Break, rather than being modeled after a full sized shotgun, is modeled after a sawed off tactical shotgun, meaning that it’s easily managed with either single or dual hand operation.[easyazon_block add_to_cart=”default” align=”right” asin=”B003YDO65K” cloaking=”default” layout=”left” localization=”default” locale=”US” nofollow=”default” new_window=”default” tag=”126p86-20″]

How This Double Barrel Dart-Shooting-Shotgun Works

The barrel break action lets you pop the gun open and drop two darts in quick, so with the eight-dart rack on top of the gun, you can fire with one hand and reload with the other. It takes a little practice, but the finesse required to do this quickly is worth bragging points alone.

Like any decent double barrel dart gun, you can fire one shot for long range attacks or both barrels for a close range assault, which may be the best use for this gun. In fact, the gun seems specifically designed for this. It seems as if Nerf wanted to offer shooters a close range last-ditch gun to be strapped to your belt or vest and pulled from out of nowhere when all hope seems lost. The small size and short barrels make it easy to carry around behind your back.

How Does it Compare to The Buzz Bee DoubleShot?

If you’ve seen other double barrel, break action guns before, then you’re probably familiar with the loading procedures, wherein you would place each dart into a shell, and then proceed to put that shell into the clip, and the clip into the blaster. The IX-2 improves on this a lot of by simply firing the darts themselves with no need for those little shells that you typically have to pack them into. Sure, those shells are cool, but if you’re out of ammo, picking a dart up from the floor and stuffing it into a shell before you can load it can mean the difference between getting tagged or winning the round.

Good Enough to be a Primary?

As a primary weapon you might find it lacking, but that’s not really the point. The point is to give shooters something to fall back on when they’re cornered, when their primary weapon is empty and there’s no time to reload, or when the game simply hands you an opportunity that you need to seize right then and there.

Bottom line: the Nerf Barrel Break IX-2 is the perfect replacement for that dinky old pistol you’ve been carrying around as a backup. You can fire it with one hand as an emergency backup gun or with both as a secondary weapon when things get a little too hectic.

Plus… who doesn’t want a double barrel dart gun?