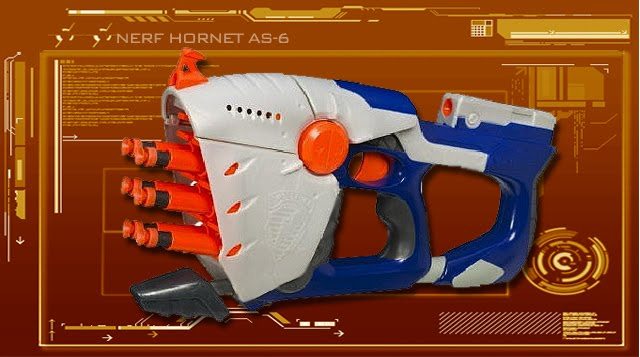 What The Hornet Offers

If you’re trying to decide between a heavy hitter like the Vulcan and something more manageable and accurate like a Spectre, the Hornet offers both. The Hornet AS6 looks a little unwieldy at first, but once you get it in your hands, you’ll see that it has a nice, lightweight feel to it, even if it looks kind of weird.

The thing that you’ll notice right off the bat is the lack of any exterior barrel. Rather, you’ve got six darts just stacked right on the front of the gun. You’d probably assume that the gun lacks accuracy for that reason, but in fact, if you fire a single dart at a time, it’s about as accurate as a Spectre, but with a bit more range. It’s advertised as being in the thirty foot range, but it typically goes just a little farther than that.[easyazon_block add_to_cart=”default” align=”right” asin=”B00135XTPO” cloaking=”default” layout=”left” localization=”default” locale=”US” nofollow=”default” new_window=”default” tag=”126p86-20″]

The real draw, though, is probably its ability to blast all six darts at once. If you’re cornered, if you’re on the run, if you don’t have time to take aim and fire off a well timed shot, this is just plain awesome. It’s almost like those video game power ups that kill all enemies on the screen when touched. You just point this in the general direction of your pursuers, hit the blast button, and shoot off a wild burst of darts in every direction. It makes double barreled blasters look almost pointless by comparison. This is where the “Hornet” moniker comes from, with the blast being advertised as a “swarm of darts”.

What About the Reviews?

The reviews on this gun do tend to vary. Most shooters will find it easy to use, while others find it a bit tricky. If you’ve ever played with one of the bigger Nerf guns and found it comfortable to operate, you’ll probably enjoy the Hornet, but for kids that find the Longshot and double barrel blasters such as the Buzz Bee Doubleshot a bit cumbersome, it might be a little tricky.

Is it For You?

The sci-fi look of the gun might be an acquired taste, but the effectiveness of the Hornet in a tight space can’t be knocked. As far as a last-ditch gun goes, the Hornet is sheer perfection, able to fight back from a corner on the fly. This is perhaps the only Nerf gun that you could fire blind, in a panic, and still hit something nine times out of ten.

If you want a good backup gun, or a pistol that can double as an assault blaster, the Hornet is definitely one to consider.