What is the Best Nerf Gun? To Buy, Mod, Or Use in a Nerf War? 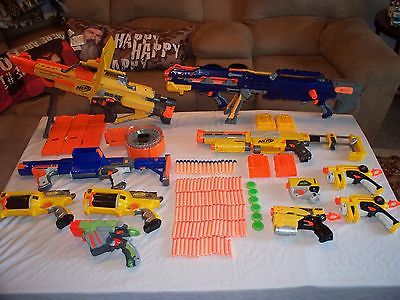 So you are looking for the best nerf gun eh? I’ve tested plenty of the new ones in the N-Strike line of 2009, and can safely say that I know of at least 2 that can fall under the “best of the best” category.

But before I reveal which I believe is the greatest out there, let me define what factors I use to rate and qualify a toy dart gun as the best:

Because accuracy and distance can be added to Nerf guns through a couple modifications, I did not include them in the above list.

So What is the Best Nerf Gun Out There?

In consideration of the above list, the best one I have come across is the N-Strike Recon CS6. I’ve shot the Vulcan, Firefly, Longshot, and a couple of others from Buzz Bee, but the Recon stands out above the crowd.

Some say the Maverick is a good choice, and while I like it, I still feel it falls short of the “best” classification.

WOAH: See our NEW favorite reason for why the Recon is the BEST out there 🙂

Why? The Maverick doesn’t offer a sleek and quick clip loading feature. It also doesn’t carry as much ammo.

The Longshot can also be argued as a worthy contender because it in fact uses a clip, but needless to say… its more weight than its worth. The sheer size of it can be considered a big downfall.

Last but not least, the N Strike Raider, which boasts of a 35 round drum magazine seems to be promising… but yet… because of its “slam fire” operation, it isn’t all that accurate. It is fast, but not accurate.

All of these fall short of the The N-Strike Recon CS6, which is compact, lightweight, can carry 2 six round clips (a max of 13 rounds if you use the extra stowaway dart storage in the grip), fast and easy to fire, and is extremely versatile.

HEY: See why we prefer the Recon even more 🙂

The stock, barrel, flip-up site and scope can all be easily removed and reattached. Take off the barrel and leave the stock on and you have the perfect weapon for tactical situations where steady shots are needed.

Remove the stock and other accessories and you have a pistol that can be stowed away in a back pack for protection in a campus wide (or city wide) game of Humans vs Zombies.

At an affordable price of $19.95 it is a great buy considering what comes with it. Other nerf guns like the N Strike Raider cost around $40, but as I said above, it still just doesn’t offer the level of versatility as the Recon.