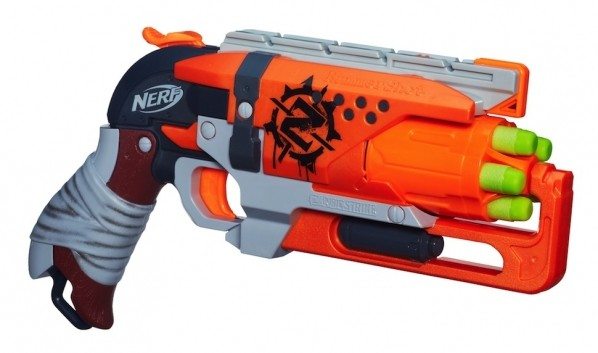 [vc_row][vc_column][vc_column_text el_class=”wpb_call_to_action”]There’s a new blaster in town, and it looks deadly. The Zombie Strike Hammershot looks to be the first of Nerf’s Zombie Strike series. The blaster holds five darts in a revolving chamber. It’s got a gnarly faux-bandage around the grip that gives it an edgy, end-of-the-world feel. It also comes with a tactical rail for your favorite attachments and two sling adapters. The biggest “cool factor” on this blaster is the hammer action. The hammer is pulled back for each shot, meaning players will look like an Old West gunslinger when they’re in action.[/vc_column_text][vc_column_text]The Zombie Strike line is new territory for NERF, and the Hammershot is the first of the series to pave the way. It looks a lot like the Wildshot from the Rebelle line that’s set to come out later in 2013. If the Hammershot is anything like the Wildshot, we can hope for a range like other Elite models; an unofficial test video shows it shooting nearly 60 feet.[easyazon_block add_to_cart=”default” align=”right” asin=”B00EEWAFSM” cloaking=”default” layout=”left” localization=”default” locale=”US” nofollow=”default” new_window=”default” tag=”126p86-20″]

Made For Humans vs Zombies?

The ZombieStrike line could be Nerf’s attempt at making the Humans vs. Zombies game an official part of the Nerf brand. Humans vs. Zombies swept college campuses across the country several years ago, and with Nerf’s official support, the game could grow even bigger.

The Hammershot is similar to the N-Strike Elite Strongarm in that they’re both front-loading revolvers. Both guns are also capable of rapid fire when the user holds the trigger and pulls back the mechanism repeatedly. What separates the Hammershot from all other Nerf blasters, though, is its look. The grip is made to look like wood, and the bandage wrapped around it gives the blaster a more realistic look. The primary paint color is orange, which is reminiscent of a warning sign; this blaster says, “zombies are coming.”