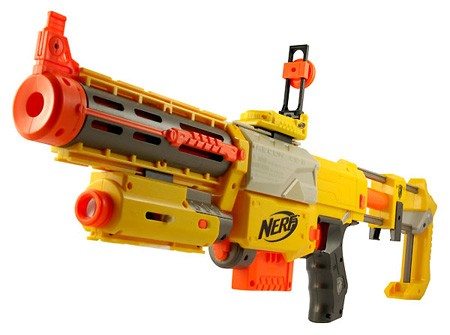 The Nerf N-Strike Recon CS-6 is way more than just a BA looking Nerf gun, its also a highly customizable tool of destruction that can be broken down into a pistol, a close-quarters rifle with light-dot sighting, or the ultimate sniper tool complete with a flip-up site and tactical stock.

This is the Nerf gun of choice.

This Nerf blaster is based around a tactical rail. The tactical rail allows for a science fiction feeling of entering an intergalactic battle.

The oversized machine-gun style barrel is almost reminiscent of an epic modern or futuristic war film. The flip-up sight also enhances this feeling of being a piece of equipment those playing with it can use for “important missions.”

In addition to the flip-up sight, the N-Strike also comes with a dual-mode laser pointer that can help increase the accuracy of the shots being taken. This feature is great for late-night games being played in darker settings.

You can expect around 25 feet per shot with the Recon.

The blaster comes with six standard-sized Nerf darts, which fill it to capacity. While the blaster isn’t one that has a huge ammo capacity, it is certainly one of the more accurate and more powerful blasters on the market.

The manufacturers aren’t exaggerating when they boast that this has an impressive ‘N-STRIKE power’ behind it!  The stock can store an extra clip of ammo (6 rounds in a clip). It has multiple sites, one light-dot and one for longer ranges.

All these awesome features add up to an excited Nerfer! No, but seriously, I call this the best valued Nerf gun out there. There is a chance you can grab one on Amazon or eBay, find replacement parts and accessories on Amazon or eBay, and have a Nerf gun that can be suitable for all Nerfing occasions.

Thinking of Painting it?

Those who love video games that involve shooting and futuristic technological weaponry will LOVE this blaster. With a high-tech chrome or black and silver paint job, you can spruce this item up to look like an impressive piece of artillery from the year 3000.

Because of its ability to be assembled in a wide range of formations, the Nerf N-Strike Recon CS-6 is able to be adapted for an equally wide range of cos-play and costume needs.

With the right combination of assembly, paint-job, and attitude, this could become the key detail to a great battle, a great costume, and a great deal of fun to be had by all!

Check out our detailed 11 step Paint Your Nerf Gun series complete with howto pictures and videos!