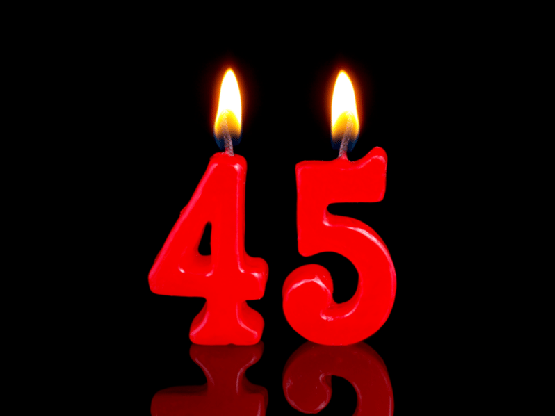 In 2014, Nerf celebrates its 45th anniversary. That is 45 years of kids and adults alike nailing each other with foam balls and darts both inside and outdoors. To celebrate the birthday of my brand of blasters, I am going to share a little bit about the history of Nerf.

Oddly enough, the very first toy produced under the Nerf brand name was a foam ball that was meant to be used in an indoor volleyball game. In 1969, an inventor from Minnesota named Reyn Guyer approached Parker Brothers with his idea for the volleyball game that families could play indoors. Parker Brothers decided to eliminate everything about the game except the four inch polyurethane foam ball.

Getting its name from the foam padding used in off road racing, the ball was coined the “Nerf ball.” It was marketed as the “world’s first official indoor ball.” Other big selling points were that you could throw it around indoors without fear of hurting old people or babies or breaking windows or lamps. In 1970, over four million [easyazon_link cloaking=”default” keywords=”nerf ball” localization=”default” locale=”US” nofollow=”default” new_window=”default” tag=”126p86-20″]nerf ball[/easyazon_link] were sold much to the chagrin of old people and babies everywhere.

Nerf soon followed up the success of the Nerf ball with [easyazon_link cloaking=”default” keywords=”nerfoop” localization=”default” locale=”US” nofollow=”default” new_window=”default” tag=”126p86-20″]Nerfoop[/easyazon_link], an indoor basketball game, and the Super Nerf Ball, a larger version of the original ball. The Nerf ball was soon replaced as Nerf’s most popular ball when the Nerf football was introduced in 1972.

It was not until 1989 that Nerf finally introduced blasters. That year, the first Super Soaker was released as well as the Blast-A-Ball game. The Blast-A-Ball was a push and pull ball blaster that came as a game that two people could play. Within two years, Nerf could come out with the Bow ‘n’ Arrow. This was a single fire pull and release arrow blaster with a direct plunger. The bow string was purely for aesthetic purposes. This was the first blaster to use arrows.

Nerf continues to dominate the world of pelting friends, siblings, neighbors, and foes with form projectiles. In 2009, they even started the Nerf Dart World Championship across the United States. Today, Nerf has its competitors, but that only seems to encourage the brand to keep coming out with new high quality blasters every year. I cannot wait to see what they come out with in the next 45 years.