eBay Is the Place To Go for Discontinued Nerf Products 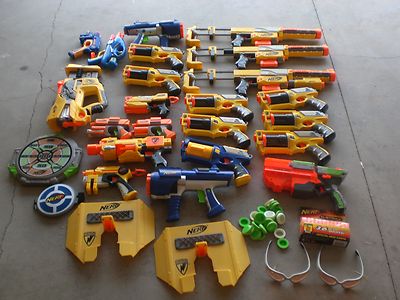 If you are a Nerf blaster junkie like I am, you know how important it is to check out eBay on the regular to find out what new items are listed. You can typically get brand new or just as good as new guns for dirty cheap. Best of all, you can get discontinued guns and mods you cannot find anywhere else.

Besides, shopping on eBay has several advantages, such as the ability to accumulate points on your orders and then convert them into vouchers. Also, there is an option to utilize Nectar with eBay, by linking your Nectar plastic card to your eBay account and convert your card’s points into vouchers.

Just make sure that you have the best internet connection possible – you don’t want to be in a bidding match with someone only for your internet to cut out at the last possible second. Should you feel like your internet is in need of an upgrade, you may wish to take a look at the Xfinity internet prices, as well as the offerings from other providers in your area, and get yourself onto a great plan that won’t let you down.

Below are some sweet find I saw today.

If you have read this blog regularly, you know that I love this blaster. Unfortunately, it has been discontinued and replaced by the Elite Rampage. For the uninitiated, this is the perfect gun for taking out every last opponent on the battlefield with its thirty-five dart drum holding Streamline darts. An auction just ended with one of these going for under twenty bucks (original retail price was $32.99), and right now, there is one available for under $25. You can also get the dart drum on its own to mod any of your other blasters. This is going for about $15.

This is another discontinued gun you can pick up for cheap on eBay. Originally, it sold for nine bucks, but I saw it listed at around six. This is a good secondary gun to have in your arsenal as you head into a Nerf war. It is a six shooter with a tactical rail. Another great feature of this little blaster is its dual wielding capabilities.

I have noticed that this is one of the most sought after discontinued blasters on eBay. It originally retailed for $29.99, but today, it can sell at upwards of $50 on eBay. There are many reasons for this. I’ll list some of the more notable features here:

This is often confused with the newer Longstrike, but they are two very different guns. The Longshot comes with a scope and was first released in 2006. It has since been discontinued. It is great for sniper play, but with its six pound weight, it is not the best in the field. It originally sold for $35, but I was seeing it for as little as $15 on eBay.

Unless you live in Australia, you can no longer get this Dart Tag series blaster in stores. The stock capacity is ten and it comes with a tactical rail, but you will have a hard time attaching a scope with the clip location. eBay has this fun little gun available for around fifteen bucks.

Have a favorite discontinued blaster of your own? Where do you look for those hard to get models?