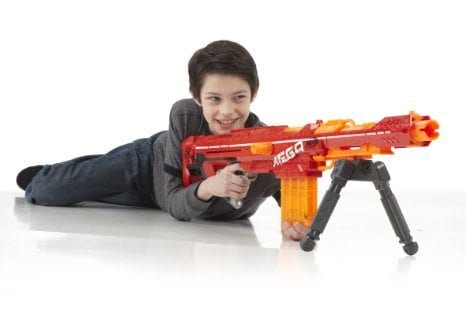 While a Nerf gun isn’t particularly difficult to figure out how to use, being skillful is another matter entirely. Especially when it comes to ranged projectiles, it doesn’t matter whether it’s an arrow or foam dart being shot-being accurate and hitting targets at a distance is impressive. Just as if you were shooting a real gun, accuracy and aim is everything, and with the help of a Hornady Kestrel 5700 Ballistics Weather Meter, hitting the target from a distance has never been easier. But when it comes to Nerf guns, this is a completely different story. So, whether you are training to be a sniper for your next Nerf war or just want tactical ways to improve your distance shooting, here are some tips to try.

Before you can start sniping down far away targets, you have to be familiar with your Nerf blaster. There’s a good reason why Nerfers prefer certain types of blasters or even one certain “lucky” gun they own. This is because not all Nerf blasters are the same, and even two seemingly identical Mavericks will behave slightly different from each other. After practicing on stationary targets at greater and greater distances, you will become more accustomed to the quirks of your particular guns. Take the time to experiment with the load out you plan on using.

There are many Nerf accessories that can help when distance shooting. Shoulder stocks steady your aim while tactical add-ons like bipods allow you to set down and support your Nerf gun while reducing human instability. Sights and scopes can help line up your shot, but are not accurate unless you know how to adjust (which usually involves shooting a bit up).

Despite what you see in movies, there are both good and bad ways to carry, hold, and shoot a gun when it comes to distant targets. As cool as they look, firing a Nerf blaster upside down or with your arms crossed in front of you probably won’t hit what you intend. Shooting accurately sideways around corners is similarly difficult.

While this varies, in general, hold your Nerf gun with both hands, and keep your elbows straight when firing. Have a proper stance when shooting while standing, with both feet planted securely on the ground.

To be more accurate, you want to minimize the shake and deviation in your hands, arms, and body overall. For many, their aim is steadier when they take the time to line up their shot while kneeling or lying down. If you are in the role of sniper during a Nerf war, these positions are also more ideal as they reduce your chances of being seen as well.

Breathing affects your aim, as it makes your Nerf blaster raise or lower slightly. Your body also shakes more while you’re breathing. When shooting at distant targets, one method to improve accuracy is to control your breathing, namely, to completely exhale before firing, or to take a breath and hold it before firing.

Similarly, if shooting at a moving target, you need to “lead” or factor in the time it will take for your shot to get there by aiming slightly in front of their current location.

What Nerf distance shooting tactics do you use? Share with us below!