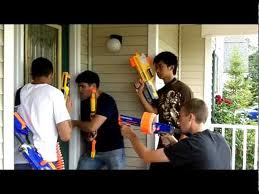 Now that school is out and summer is in full swing, there’s no better time for a Nerf war. It doesn’t even matter if you only have a few people or a ton. Any excuse to run around and shoot each other with Nerf guns is a good time.

Don’t forget to set rules when organizing your Nerf battles. This not only reduces conflict, but increases the amount of fun you can have. Even if you’re happy just playing Capture the Flag every time, here are some more game modes to try out at your next Nerf war.

Players: At least two. Arm everyone with the same type of blaster or a certain number of bullets.

Battlefield: Can be indoor or outdoor, but must be large enough to allow all duelists to have enough space away from each other while still staying in one spot. Each player must be surrounded by a clearly marked circle to stay in. Try to keep all the circles about the same size in proportion to the person inside. A player can jump, bend, duck, or avoid being shot however they wish as long as they stay in their circle.

Objectives: Try to shoot all the other players while dodging the shots aimed at you. A player is out once they are shot, leave their circle, or run out of bullets. Last person standing wins.

Players: At least 6, though more is better. There is one VIP or President, who has only one life and is either unarmed or only has a light Nerf gun. Two players are bodyguards, with multiple lives, while the remaining three are assassins. Assassins are not allowed to use physical contact attacks or rapid fire automatic blasters (like the Stampede or RapidStrike). Bodyguards can take bullets meant for the VIP and are armed with whatever weapons they wish.

Battlefield: A decently large indoor or outdoor area that has various types of cover (for assassins to approach from or the VIP to hide behind) and more than one path to a designated area.

Objectives: The VIP’s goal is to make it from a start point to a certain end area without dying, or to survive for a certain length of time without being shot. The bodyguards’ goal is to protect the VIP during his journey while thwarting and eliminating the assassins if possible. The assassins want to assassinate the VIP before he reaches his destination.

Players: At least 8, divided into two teams of at least 4 per team. Each person brings a primary and secondary gun.

Battlefield: Outdoors is better, in a large enough area for people to run around comfortably in.

Objectives: Everyone places all their weapons in a pile before spreading out an equal distance away. At a certain signal (like air horn blast or whistle), all players run to the pile and grab what they can to shoot each other. “Dead” players must lie down prone, the last person standing wins.

Which one of these three Nerf war game ideas do you like most?