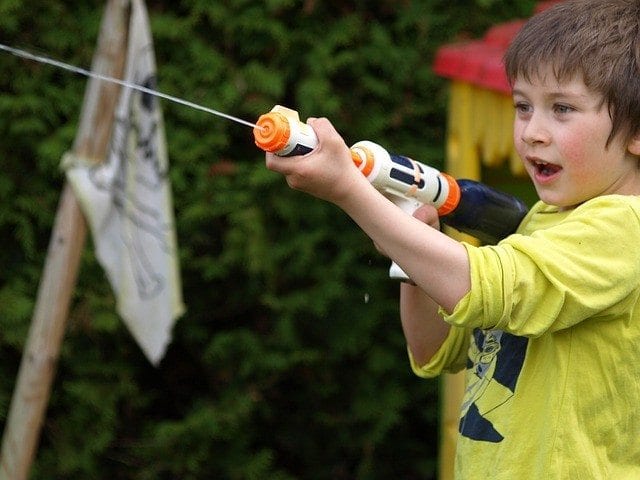 Its official, summer is here! With the summer solstice at the end of June and temperatures rising as we head into July, there’s no better time to break out your arsenal of Nerf Super Soakers. Better yet, it’s the best time to try out Nerf’s 2014 Super Soaker lineup. From the Barrage, Double Drench, and Alphafire to the Hydrostorm and Tri-Strike Crossbow, a new load out for drenching others is just a step away.

Whether you just want to have fun and cool down with friends or are looking up activities to liven up the next pool party, here are some Super Soaker game ideas to try.

For some, classics are all they need to have a blast. Just arm everyone with a water gun, preferably one with good capacity, and let them run around soaking each other. Make sure there are enough taps and water buckets that players can use to refill their Super Soakers. You can divide everyone into two teams and set rules, or just let each person fend for themselves in an all-out water war.

You’d be surprised how competitive this simple game can get. In your backyard or at the beach, set up a decently long race track (around 100 feet or so) with a clearly marked start and finish line. Give each player one water filled Super Soaker and a beach ball. At “go” everyone at the starting line begins shooting their beach ball with their water gun to push it forward. No kicking or physical contact with your or others beach balls allowed. Players can use their Super Soakers to spray and hinder each other however, and the first person to spray their beach ball across the finish line wins.

Rather than tag each other with their hands, this version requires players to tag each other using a Super Soaker. For standard tag, one person is “it” and when they spray another person, that person becomes “it” and is given the Super Soaker. For freeze tag, the game runs the same except the tagged person is “frozen” in place and can only be “thawed” by someone crawling under their legs. If the person who is “it” manages to “freeze” all the other players, they win and get to choose who will be “it” next.

For both these versions, one or two outside referees can help keep things fair and free of problems. Before playing, make sure you are in an area that is large enough for several people to run around in but has clearly set “out” boundaries.

Good for both old and young players, target shooting with Super Soakers is a fun test of skill. You can line up and knock over plastic cups, spray ping pong balls off the top of soda bottles, or shoot down toys like those little army men figurines. To increase the competitive spirit, set a time limit or number of shots allowed, with the most accurate person being the winner.