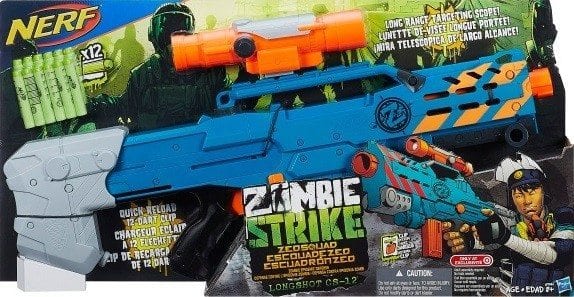 The Nerf Strike ZED (Zombie Epidemic Defense) Squad Longshot CS-12 Blaster’s release is one of the most highly anticipated pieces of merchandise to be released this fall. Due to be released August 3rd of 2014, the CS-12 is the predecessor of the Longstrike CS-6. It was previously released a few years earlier. News of the CS-12 Blaster was leaked in the UK and the immediately brought forth excitement of Nerf devotees.

The Longshot CS-12 Blaster has several features that ensures this gun lives up to the hype the leak has associated with its release. The CS-12 Blaster is equipped with a long-range target scope that offers assurance of the precision. Any shot fired can travel up to 55 feet. It holds 12 Zombie Strike Darts and has quick reload clip that houses the darts. The clip makes reloading fast and ultimately effortless. The gun has a press trigger.

The CS-12 Blaster is a part of a Nerf Blaster series titled “Z.E.D. Squad”. The other guns that are featured in the series are the Nerf Zombie Strike Magnus Blaster 2-pack and the Zombie Strike Clear Shot. The Magnus Blaster shoots up to 85 feet, which is 30 feet farther than the CS-12 Blaster. The Clear Shot is a significantly smaller gun than the CS-12.

Once purchased, the CS-12 Blaster will include a few things. In addition to the gun, the long-range targeting scope, the 12 Zombie Darts and the quick reload clip are included. It is desgined for handlers ages of 8 years and above.