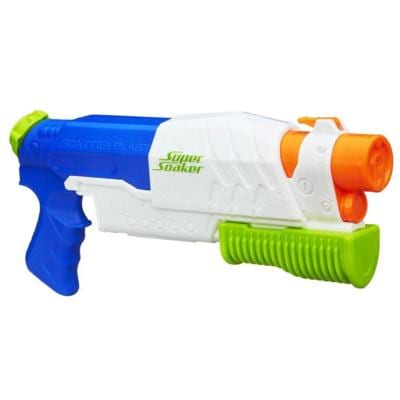 With June being the hottest month of the year, having fun while still staying cool is a top priority. Whether you’re at the beach, a pool party, or just soaking your friends in the backyard, spraying each other with Super Soakers is a great summer activity, especially if your pool is out of action whilst you’re using pool remodeling services (at least your pool will be better next year). Water gun battles not only let you beat the heat in an awesome way, but also get you active and moving. Spice up your water gun fights by trying one of these fun Super Soaker game ideas.

A combination relay and target shoot, teams compete to fill their bucket up first using Super Soakers. Although this game is simple, it can be a blast when people aren’t afraid of getting wet and have a sense of humor.

Suitable outdoors, you’ll need to mark a shooting line and a spot for the bucket holder. A decent distance is about 25 to 30 feet away, but adjust based on the range of the water guns you are using. Each team should have an identical bucket or bowl (not too large) and small-to-medium capacity Super Soakers for each person. Someone will need to be a referee/time keeper.

To play, the first bucket holder stands on their designated spot with the bucket either held in front of their chest or on top of their head, while everyone else lines up behind the shooting line. Each person takes turns to shoot and tries to fill their team’s bucket as much as possible in 1 minute (or 30 seconds). Then the first shooter and bucket holder switch places, with the second shooter coming up to shoot, and so on. The first team to fill up their bucket wins.

This game is simple but does take some prep work. Each player will need a Super Soaker and an Alka-Seltzer necklace. (To make, just drill a hole through 1 to 3 Alka-Seltzer tablets using a needle or something similar before threading them through a loop of string or yarn.)

To play, have all players put on their necklaces and make sure everyone understands the boundaries of the battleground (mark clearly if needed) before setting them off at “Go!” All players are attempting to dissolve everyone else’s necklaces while keeping theirs safe. The last person standing with an intact necklace wins.

Run the Gauntlet/Shaving Cream Shoot Off

Set up a path ranging from 30 to 60 feet in length, with a bucket at one end and small objects (like rocks, clothespins, plastic toys, etc.) at the other. Each player (except the runner) needs a pistol/small capacity water gun.

The runner gets a shaving cream target sprayed on the front of their chest/shirt and tries to deliver as many objects (one at a time) to the bucket. The shooters must stand along the path (2 or 3 feet away) and try to end the runner’s turn by spraying off all the shaving cream as quickly as possible. Everyone takes turns being the runner (keep the shaving cream amount the same), and whoever was able to deliver the most objects wins!

What’s your favorite Super Soaker game? Share in the comments below!