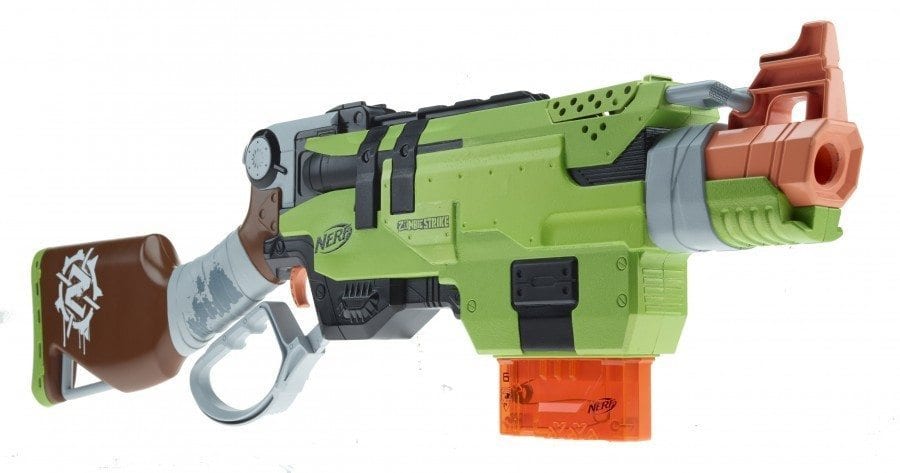 Does your dorm roommate wander around at night sleepwalking as a cast member of the Walking Dead? Wouldn’t it be fun to fire some foam his way to wake him up? Is there a stupid looking bobble-head on your co-worker’s desk that you can’t stand? Envision yourself ambushing the goofy doll while blasting it off of his desk! One of Nerf’s new blasters from its Zombie Strike line may do the trick if you have the nerves of steel to pull it off.

The Slingfire has a cool new look for you foam firing fanatics. This is Nerf’s first lever-action rifle and looks like it could have come right out of Cowboys & Aliens. It comes with a six-round magazine, but there is an 18 shot magazine available. The lever-action allows you to cock and fire on the run as it cycles a new foam projective every time you cock it. Reloading is as easy as popping in the next magazine. If you get a jam, there is a quick door to access the chamber area and clear the blockage quicker than your sleepwalking roomie can cross the room.

Nerf claims that the Slingfire has a range of 75 feet, and that is more than enough distance to wipe out your co-worker’s bobble-head. Of course, it has several points for attaching a bandolier. The coolest new thing added to this blaster is the tactical rail above the barrel. Nerf has a line of N-Strike scopes and accessories you can add to your beast.

This new Zombie Blaster would look totally cool sported with a faux wood and cold steel look. Something about that lever action makes you want to have a showdown with the walking dead in a zombie western or at least dueling little Timmy next door.

The N-Fire Strike Elite series is still tops with the Zombie Strike series coming a close second. But any fanatic of foam fusillades will love the new Slingfire. The darts are a coolly recolored version of the Elite darts, but who cares when you are wiping out enemies of the universe.