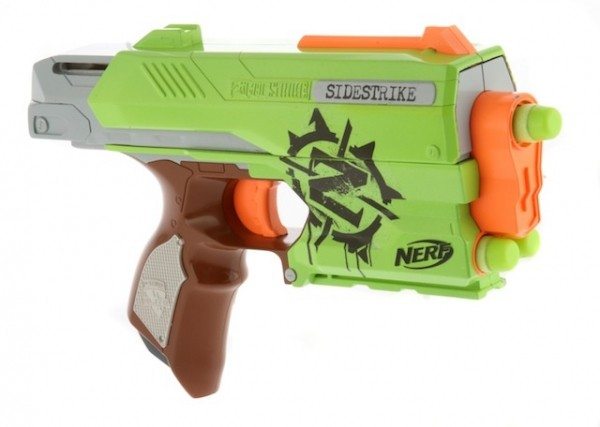 Sharing the appearance of an energy weapon in post apologetic worlds like Fallout and Mad Max, the Nerf Zombie Strike Sidestrike is a four-shot pistol with an elongated front barrel. The four quick shot rounds can be shot off in rapid succession, but with the attachment clips located along the top and bottom of the Sidestrike, this dart gun gives you access to additional ammunition when you need it. Outside of the attachment clips to the gun and its rapid fire, there are no real other features to this small pistol.

The Sidestrike is similar to the other pistols in the Zombie Strike lineup of Nerf guns. The main difference though is the over exaggerated front barrel of the weapon. The handle features a nice burnt red and cream handle. The entire gun could utilize this exact color pattern to replicate something out of a Star Wars film, although it might also look excellent in a beaten up bronze color as well, almost as if you built the weapon yourself in order to provide the best quick draw feature out there. The front barrel where the darts are fired from, which currently bolsters a bright, neon orange look, could be replaced by a matte black, on top of the beaten bronze, just to accent the weapon nicely and give a well-used, often-fired look. This way, your enemy knows you have fired the weapon often and know how to use it.

The Nerf Zombie Strike Sidestrike comes with a holster, so you don’t have to simply walk around with your new Nerf weapon, but instead can have it close to your hip at all time. The holster itself has dart attachment compartments, as does the pistol, so you can have numerous additional options should you clear the clip and unload immediately on your enemy.

Located closer towards the bottom of the Nerf Zombie totem pole, the Sidestrike does offer more punch than the Dualstrike piste, as this not only has four shots to the Dualstrike’s two, but you can unload the fire rounds in at least the same time, if not faster than the other option. Plus, you have the holster as well, which makes it that much easier to carry around two.