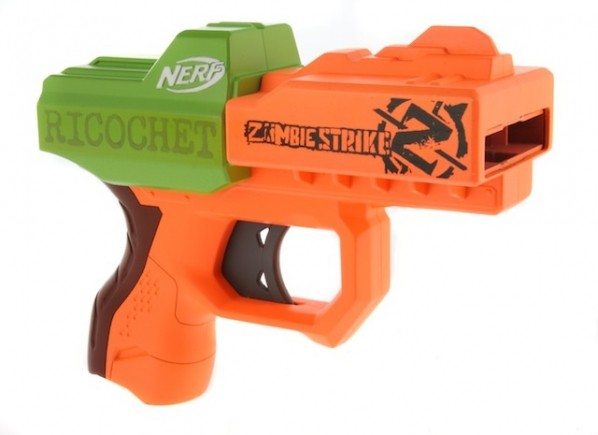 No one is safe, but you can be prepared. You and your friends will be ready to take on the zombie horde with the Nerf Zombie Strike Ricochet Blaster. This burly blaster, constructed of heavy plastic with a formidable barrel, front loads two special “Zombie Strike” discs. Snap the slide back, get into position, then blast the enemy with both discs simultaneously with the full force of Nerf!

With fast slide action, a super-quick disc loading process and a responsive trigger, this dart gun kills zombies dead. The grip is large for easy priming. When firing from shoulder height, you’ll have a range of about 27-35 feet. This is a very lightweight, smaller size blaster useful for short range combat. It’s a great pair with the Nerf Zombie Strike Crossfire bow which gives you a little more standoff capability at up to 44 feet. Because you can load it and shoot it fast, you’ll want to grab some extra discs. You’ll earn the awe of your friends as you duck around corners and blast the undead. Fans of the N-Strike Elite Strongarm Blaster or the Vortex Proton Blaster will like this gun for its quick firing of brightly colored discs.

The Ricochet is a solid, tough-looking gun. It has old-school design elements which make it resemble the classic Resident Evil Magnum Blaster. It comes in bright orange with a green barrel and brown accents on the grip. Fitting with the zombie post-apocalyptic theme, this dart gun would look terrific with some battle scars and a gritty, well-used metallic paint job. The barrel and the slide also have enough steampunk elements that you could mod it with some brown (for wood) and brass or bronze paint. Because of the long slide, you may need a couple of coats of paint to make sure you’ve covered all the parts.

The Nerf Zombie Strike Ricochet Blaster is on the lower end of the Zombie Strike line. Pack it as a sidearm and use it with the Hammershot Blaster or the Sledgefire to rack up kills in every arena.